For weeks now, hundreds of thousands of people have demonstrated in Hong Kong against the increasing influence of the Beijing government over their region. People in mainland China, however, have little sympathy. 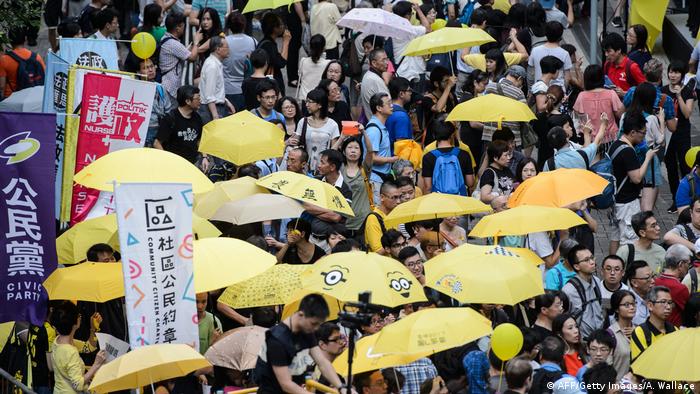 Shanghai, on the east coast of China, has a population of more than 23 million. It's generally regarded as the most important economic metropolis in the People's Republic. 1,200 kilometers to the south, Hong Kong, too, is a major financial hub — but there's little sympathy in Shanghai for the protesters there.

"What are they doing? Why are they acting up like this?" a 30-year-old office worker asks. Speaking to German public broadcaster ARD, he commented that the people of Hong Kong should "just get on with their work and peacefully get on with their lives." His opinion was that the whole protest was pointless — and it's a view the majority of mainland Chinese people probably share.

That's certainly the impression gained by the journalist Jose Qian. He estimates that 90% of mainland Chinese are critical of the protests in Hong Kong. Qian lives in Shanghai, where he works for various international media outlets and has his finger on the pulse of the city. He says the people of Shanghai are well aware that something's going on in Hong Kong.

"They probably don't know exactly why it's happening, how long it's been going on, or what the phases have been," Qian told DW. "They probably don't really know what the Hong Kong demonstrators' demands are, either." Consequently, he says, public opinion in Shanghai is being shaped by resentment and fears of possible violence in Hong Kong.

" I support the Hong Kong police,"one woman says, who used to work in the city's financial district. Since Hong Kong became part of China, the economy and business have benefited a lot, not least because of mainland China's support, she says. "That's why I say — albeit without being there now — radical action is wrong.

Qian believes such opinions are formed with the help of Chinese state media. It does now cover the events in the Hong Kong Special Administrative Region, he says, but they always toe the Beijing government's line.

State media is the main source of information

"You can call it propaganda, you can call it an official media campaign, but there's only one version of the story here," Qian confirms. He explains that state media don't report on the background to the protests or how they began; instead, they focus on the escalation in Hong Kong. The outbreak of violence is the main emphasis of the reports, which often use just a few images that show demonstrators who are prepared to use force.

Most mainland Chinese have no other source of information apart from state media, says Qian. It's therefore understandable that many of them adopt the Beijing government's official attitude: that "the Hong Kong demonstrators are generally violent, that some of them are extreme radicals, that they injure people and damage public property." The demonstrators are even mentioned in the same breath as terrorism, so "people feel very supportive of the government — both the government in Hong Kong and the one in Beijing."

This is borne out by reactions from people on the street in Shanghai. A pensioner, who says that what the demonstrators in Hong Kong are doing is clearly wrong, states that he gets most of his information from Chinese state television broadcaster CCTV, and China National Radio. The 70-year-old comments that Hong Kong has always been a great city and an important financial center – which makes him take a particularly negative view of the demonstrators: "That mob has only done bad things so far, nothing good!"

Hong Kong airport has reopened after being shut down by two days of violent clashes between police and protesters. Airport authorities said they had obtained a judicial order to stop further protests. (14.08.2019)