Hong Kong airport has reopened after being shut down by two days of violent clashes between police and protesters. Airport authorities said they had obtained a judicial order to stop further protests. 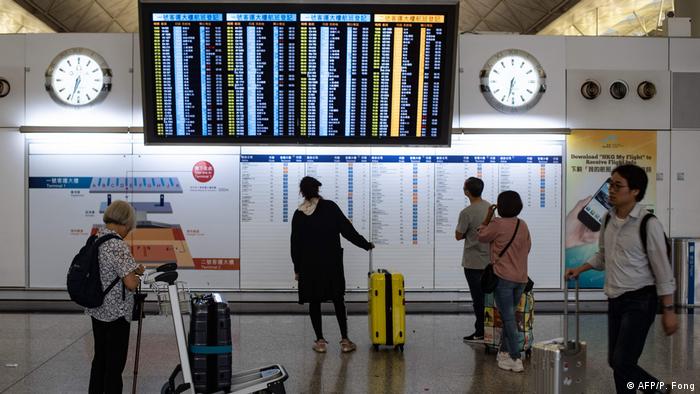 Hundreds of flights were reported rescheduled and check-in counters were opened to hundreds of travelers who had waited overnight for their flights.

One of the brawls on Tuesday broke out after pro-democracy protesters suspected two men of being spies from mainland China.

Beijing on Wednesday said it condemned what it described as "terrorist-like" attacks on its citizens by pro-democracy protesters.

"We express the strongest condemnation of these terrorist-like actions," said Xu Luying, a spokeswoman at the Hong Kong and Macao Affairs of the State Council, who called the two men who were beaten "mainland China compatriots."

According to the South China Morning Post, around 50 protesters who had spent the night at the airport remained in the terminal Wednesday morning. Airport Authority Hong Kong issued a statement Wednesday saying that it had obtained an interim injunction "to restrain persons from unlawfully and willfully obstructing or interfering with the proper use" of the airport. The statement also said that protests and demonstrations were banned in any area of the airport unless permitted by authorities.

Hong Kong has been reeling under protests that began 10 weeks ago in opposition to a bill that would allow the territory to extradite people facing criminal charges to mainland China. But the movement has expanded to include wider calls for democracy.

Scuffles broke out Tuesday evening between demonstrators and police outside the airport after some protesters blocked several police vehicles. Officers with shields pushed back protesters near one of the airport entrances and used pepper spray to break up the crowd.

Violent scenes of crowds fighting with police drew condemnation from authorities. Protesters have said the police are using excessive force, such as firing rubber bullets and tear gas.

Read more: US and China row over 'dangerous' Hong Kong reports on diplomat

Beijing on Wednesday said it condemned what it described as "terrorist-like" attacks on its citizens by pro-democracy protesters.

"We express the strongest condemnation of these terrorist-like actions," said Xu Luying, a spokeswoman at the Hong Kong and Macao Affairs of the State Council, who called the two men who were beaten "mainland China compatriots."

Hundreds of flights had been canceled or suspended on Monday and Tuesday after protesters staged a sit-in in the main hall of the airport, using luggage trolleys to stop passengers from passing through security gates.

Some travelers were blocked by protesters and kept from exiting the airport after their flights had been canceled.

Airport Authority Hong Kong said operations at the airport, which is one of the busiest in the world, had been "seriously disrupted" by the demonstrations.

Tourism agencies in Hong Kong have also reported a drop in bookings, and the city's authorities earlier this week warned of economic consequences if the demonstrations continue.

On Tuesday, UN High Commissioner for Human Rights Michelle Bachelet urged Hong Kong authorities to exercise restraint, saying there would need to be "prompt investigations into the use of force by law enforcement."

"Take a minute to think, look at our city, our home; do you all really want to see it pushed into an abyss?" Lam said.