An extradition bill has sparked mass protests in Hong Kong. The bill has been stalled, but citizens want it scrapped and Chief Executive Carrie Lam ousted. DW looks at the pro-democracy movement's major milestones. 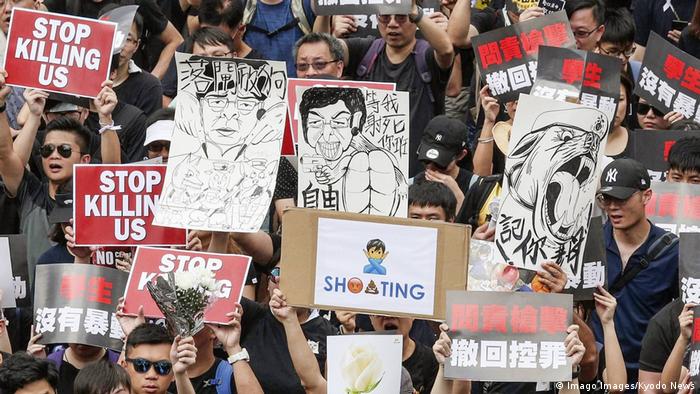 The protests against the extradition law morph into a broader movement against the Hong Kong government, police brutality and the encroachment of Beijing on the city's autonomy.

The Hong Kong and Chinese governments increasingly try to label protesters as "rioters" and "terrorists" backed by foreign powers.

With neither side bowing down, there are rising fears Beijing may intervene with force.

As massive street protests continue to roil the streets of Hong Kong, protesters in early August engage in a multiday sit-in at Hong Kong airport to highlight their cause to the international community.

The United States, Canada and the European Union call on all sides to show restraint and avoid violence that could escalate the situation in one of the world's main business hubs.

Mass protests continue to take place in Hong Kong despite the government shelving the proposed extradition legislation, which would have allowed people to be sent to places, including mainland China, for trial.

The demonstrations have now evolved into a broader backlash against the city's administration and its political masters in Beijing. Hong Kongers were outraged by attacks on pro-democracy protesters by suspected pro-government gangs.

Demonstrations also took place at Hong Kong's international airport, where hundreds of protesters gathered to "educate" tourists on the protests. Some airline workers declared support for the demonstrations.

The unrest has become a major headache for the territory's leadership.

The Hong Kong government thinks the suspension of a controversial extradition bill  will calm the hundreds of thousands of protesters. It doesn't. At least 2 million people took to the streets on June 16, demanding Chief Executive Carrie Lam to step down.

Protesters say the extradition law is part of a campaign by Beijing to undermine the semi-autonomous region's democratic institutions.

In one of the biggest demonstrations since 2014, thousands of people take to the streets against proposed extradition rules that would allow people to be sent to mainland China for trial.

In February, Hong Kong authorities proposed that the city's chief executive, Lam, be given powers to send fugitives and suspects to jurisdictions not covered by existing arrangements, including to mainland China and Taiwan. Current arrangements exclude China because of its poor legal and human rights record.

A new generation takes to the streets

Hong Kong authorities come under immense pressure from the international community to ditch the extradition bill. The foreign ministers of Germany and the UK speak out against the bill, while 11 European Union envoys meet Lam to formally protest the law.

A Hong Kong court finds the top leaders of the Umbrella Movement guilty of conspiracy to commit public nuisance and incitement for their roles in the 2014 pro-democracy demonstrations.

The 2014 protests, which were spearheaded by three of the defendants in the trial, called for free elections for Hong Kong's leader. 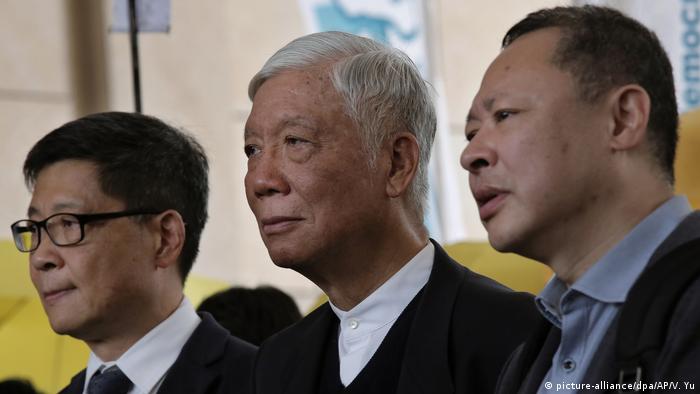 Founders of the Occupy Central movement

It marks the first time that Hong Kong has banned a political party since it was returned to China from the UK in 1997.

A Hong Kong court disqualifies two pro-independence lawmakers after they use anti-China insults when being sworn into office.

Separatist legislators Sixtus "Baggio" Leung, 30, and Yau Wai-ching, 25, sparked controversy during their swearing-in ceremony in October 2016 when they deliberately misread their oaths, substituting derogatory terms for "China" and draping themselves in flags emblazoned with "Hong Kong is not China."

The decision to disqualify lawmakers is preempted by Beijing's ruling earlier in November 2016, after it circumvents Hong Kong's courts to hand down its own interpretation of the Basic Law. Beijing rules that Hong Kong legislators must swear allegiance to the region as part of China. 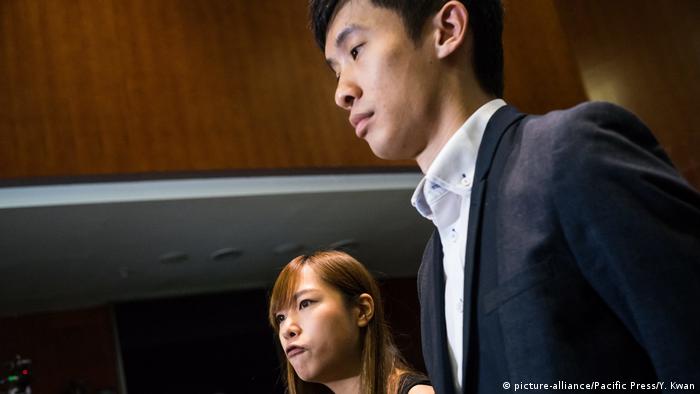 Thousands of protesters march through the center of Hong Kong, demanding to know the whereabouts of five missing people linked to a publisher that had been critical of the Beijing leadership. Five people went missing between December 2015 and January 2016. The publisher was known for releasing gossipy titles about Chinese political scandals and the private lives of the elite.

"No to political kidnap!" demonstrators chant, brandishing banners featuring the words "Where are they?" as they head toward Beijing's liaison office in Hong Kong. 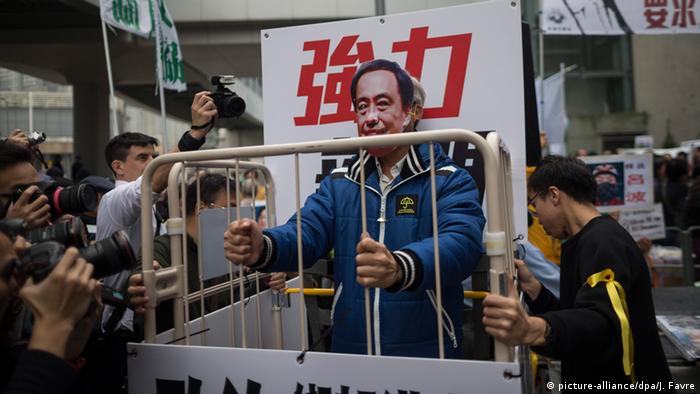 In 2016, several thousands people marched to the China Liaison Office over the disappearance of five missing booksellers

Starting in September 2014, large-scale protests demanding more autonomy rock Hong Kong for over two months. Beijing had announced that it would vet candidates for the 2017 election of Hong Kong's chief executive. The protests are referred to as the Umbrella Revolution, because protesters use umbrellas to fend off pepper spray and tear gas used by police.

Over the course of the protests, mass demonstrations paralyze Hong Kong's financial district and highlight widespread frustration over the shrinking of the city's civil liberties. 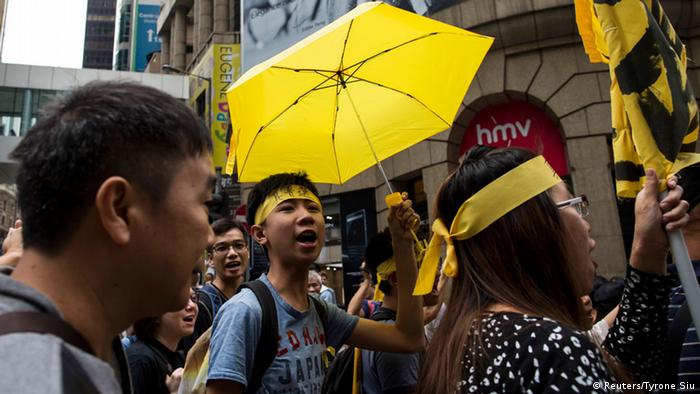 On the 20th anniversary of the Chinese government's brutal crackdown in Beijing's Tiananmen Square, Hong Kong residents gather for a candlelight vigil in Victoria Park. The purpose of the demonstration is to show how different Hong Kong was from China, where the massacre of pro-democracy supporters and students on June 4, 1989, is usually only referred to as the June Fourth Incident.

Hundreds of thousands of protesters take to the streets of Hong Kong in a historic rally against a controversial national security bill.

The demonstration is the biggest in Hong Kong since its return to Chinese rule. Protesters chant "Power to the people!" and "Down with Tung!" during the march against the anti-subversion bill as they demand then Hong Kong Chief Executive Tung Chee-hwa to step down.

The government eventually succumbs to the pressure and scraps the national security proposal. 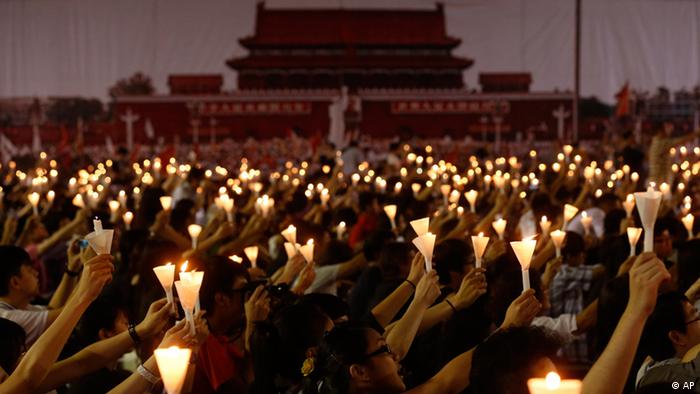 Protesters in Hong Kong are calling for civil servants to stay home on Monday as a sign of solidarity with the pro-democracy movement. However, civil servants supporting the demonstrations are taking a big risk. (02.08.2019)

Twenty one years since the transfer of Hong Kong's sovereignty from the UK to China, considerable opposition to Beijing's rule remains. DW spoke to law professor Johannes Chan about potential consequences of protest. (29.06.2018)