Protesters in Hong Kong are calling for civil servants to stay home on Monday as a sign of solidarity with the pro-democracy movement. However, civil servants supporting the demonstrations are taking a big risk. 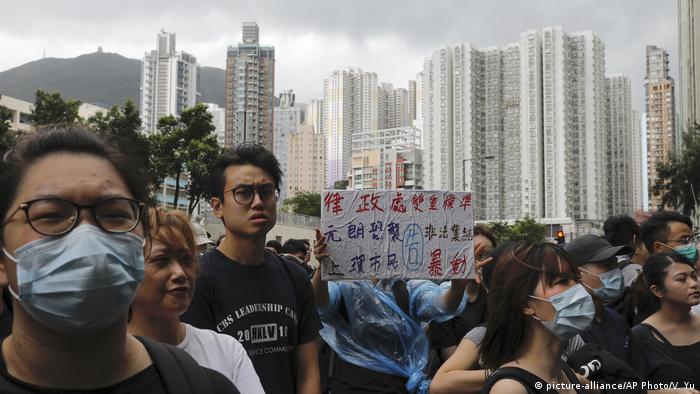 Mong Kok is a busy neighborhood in Hong Kong known for its maze of narrow streets brimming with lots of markets and eateries.

Carol Ng, the chairperson of the Hong Kong Confederation of Trade Unions, and several staff were busy Thursday handing out white wristbands to busy shoppers and commuters in Mong Kok for a general strike planned for Monday, August 5.

Protesters are calling for a general strike in Hong Kong in an attempt to put pressure on the city's government to meet their so-called five demands. These include full withdrawal of draft legislation for a controversial extradition bill, and the creation of an independent committee to investigate alleged police brutality during the mass protests over the past two months, among other things.

They reminded all Mong Kok residents and visitors to join the general strike and wear black shirts to work every Monday.

Ng said it took just a week for protesters to call for a strike and to mobilize citizens through various unions. Social media, like Telegram, has also been used to mobilize demonstrators. Various industry bodies have set up their own groups to take part in the strike.

Ng told DW that striking has always been the most effective weapon for expressing the union's concerns. Now it has turned into an effective way to mobilize millions of Hong Kongers to take part in the ongoing anti-extradition bill movement, he said.

"A strike allows everyone to contribute to the movement and gives it strong momentum," Ng said. "Even though our organization has over 200,000 members and we have initiated several workers' movements in the past, this time we are just one of the participants."

Hong Kong has witnessed mass demonstrations over the past few months, with millions of people taking to the streets to protest against an extradition bill.

The bill would allow fugitives and suspects to be sent to jurisdictions not covered by existing arrangements, including to mainland China, for trial. Current arrangements exclude mainland China because of its poor legal and human rights record.

The rallies have forced the city's government to shelve the bill. But the protests have since morphed into a much broader political campaign for democratic reforms in the former British colony amid concerns that Beijing is tightening its grip on power.

The current unrest is one of the biggest political crises in Hong Kong's modern history and has become a major headache for the territory's pro-Beijing leadership. 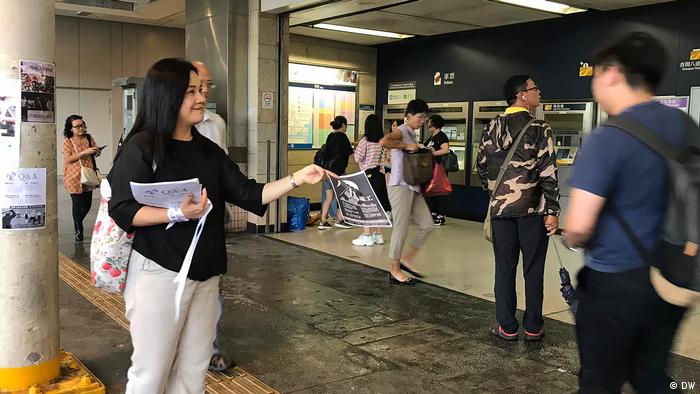 'A strike allows everyone to contribute to the movement and gives it strong momentum,' said Carol Ng

"Posters about the protest have been displayed in bathrooms, hallways, pantries and walls across the government headquarters," said Alex, an executive officer at Hong Kong's Innovation and Technology Bureau.

Alex showed DW the posters, some of which bear the slogan "after work, we are all Hong Kongers."

"Many civil servants are taking huge risks by taking part in the protests," Alex said. "Even though we shouldn't let our personal political agenda interfere with our work, once we leave the office, we are all Hong Kong citizens, enjoying the right and freedom to express our views."

The civil servants' protest is an unprecedented gathering, as the civil service has traditionally been guided by the principle of political neutrality. On August 1, the Hong Kong government issued a stern warning, telling them to remain politically neutral and have "total loyalty" to the city's chief executive, Carrie Lam, or risk consequences.

"Taking part in this kind of a rally could potentially damage the careers of civil servants," said Alex. "But we're willing to take the risk, because we realize that our participation can help encourage many Hong Kongers to follow suit."

Since the start of the anti-extradition movement, Alex noted, many civil servants have been enraged by the government's handling of the protests and unwillingness to meet the demonstrators' demands. That's why the call for a rally of civil servants received tremendous support within a short period of time, he said.

"Those who have the authority to solve the problem refuse to act responsibly," Alex said.

"Carrie Lam's team has lost all credibility to administer the city."

Since July, there have been several violent and serious clashes between police and anti-extradition bill protesters. Over 100 protesters have been arrested while dozens are facing charges like participating in riots, which carries a heavier sentence.

Sam is a 33-year-old engineer who has been actively participating in the street protests over the past couple of months. He believes there is a need for protesters to adjust their strategy, eschew violence and adopt peaceful and rational ways.

"Violent tactics by protesters could give the government legitimate reasons to disperse protests by using force and weapons," he told DW. "I think it's not a good idea for protesters to confront the police with violence. I hope we can start using more peaceful, rational and non-violent means to protest."

Activists believe the general strike on August 5 will be crucial for Hong Kong. Alex and Ng say the strike could give fresh momentum to the anti-extradition movement.

"Many protesters are of the view that extreme measures like storming the legislative council building won't be effective. If the movement continues this path, it could eventually meet a dead end," Alex said. "Many of us think it's time to take part in large-scale strikes and try to bring about change through non-cooperation movements."

On the busy streets in Mong Kok, some people took the protest banners handed out to them by Ng and her team, while others simply walked past.

"The meaning and importance of political rights should mean more than not going to work or doing business for a day," Ng tried to explain to people on the street. "We are all in this together."

Authorities have levied the most serious charges — with a 10-year sentence — against protesters since demonstrations began last month. Pro-democracy activists say reclaiming Hong Kong is the "revolution of our times." (31.07.2019)