The people of semiautonomous Hong Kong are right to be concerned about China's government. The FAZ journalist Peter Sturm explores the mainland's potential military threat to the territory in this guest commentary. 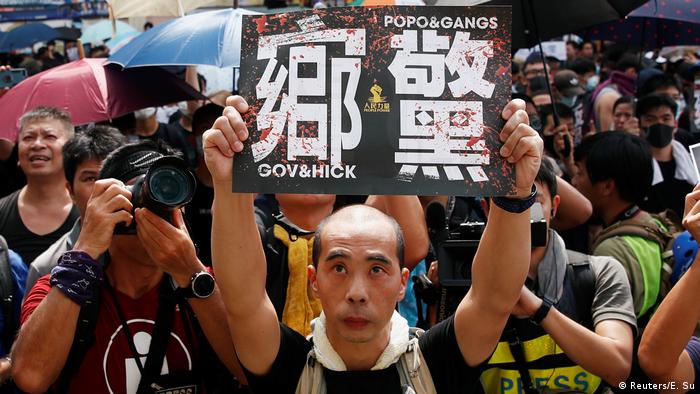 There is an overwhelming fear in Hong Kong that the territory may soon lose its status as a special administrative region that the heavy-handed government of China has so far mostly kept its hands off.

It all started with a proposal to change the law so that extraditions to the mainland would be permitted — even though officials in Hong Kong are well aware of the Chinese government's creativity in creating criminal offenses with which to charge the otherwise innocent.

China's government simply hasn't earned the trust to implement such a law, and people in Hong Kong rightfully found their justice system more in line with international norms.

Many in Hong Kong have tried to keep the Chinese government from interfering in the semiautonomous territory's affairs for as long as possible. In recent weeks, Chinese officials have been surprised by just how many. Young protesters have been especially forceful in expressing their dissidence, as demonstrated by their storming of the Legislative Council. That may have been a tactical error, as the events of this week have demonstrated.

When demonstrators were beaten by masked men with iron clubs last week, the absence of the police — who have showed up quickly and en masse to put down protests — was glaring. In whose interests were the democracy dissidents beaten?

Occupation by mainland forces would be a clear violation of the deal that led Britain to hand over the former colony to China in 1997 under terms that stipulated that the territory's autonomy would be preserved.

However, it appears that no countries that otherwise preach democracy are willing to intervene — a fact that has emboldened China's government.

Hong Kong was once expected to be the model that Taiwan, a breakaway island that China seeks to bring back under mainland control, would follow.

China's government had sought to demonstrate that its "one country, two systems" model might even be appealing.

The hope now is that China does not attempt to set a different type of example. Otherwise, Taiwan may also soon be threatened with reunification through military invasion.