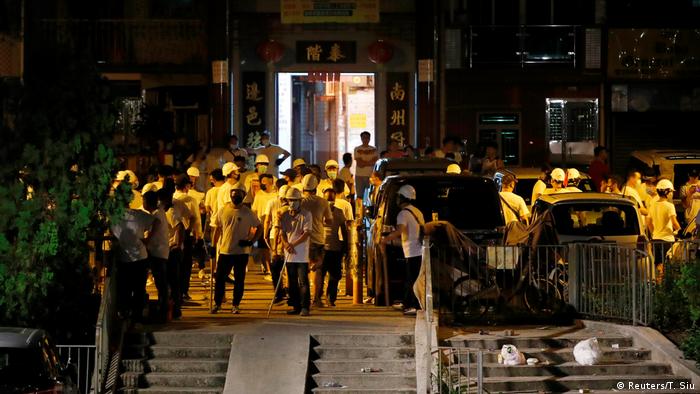 Media in Hong Kong have released footage of masked men in white shirts beating black-clad protesters with steel pipes and wooden poles in a subway station and on public transit. The protesters attempted to defend themselves with umbrellas.

Passengers said police did not intervene in Sunday's attacks by the men, which left 45 people injured.

On Saturday, demonstrators wore white at a counter-rally in support of police.

Hong Kong's opposition Democratic Party is investigating the attacks amid suspicion that they involved the triad, a Chinese organized crime group. Democratic Party lawmaker Lam Cheuk-ting, who was injured in the attack, said police had let the triads run rampant.

"Is Hong Kong now allowing triads to do what they want, beating up people on the street with weapons?" he asked reporters.

Hong Kong leader Carrie Lam on Monday promised a police investigation into the violence at the subway station. However, she called allegations that police colluded with masked assailants "unfounded."

Elsewhere on Sunday, riot police fired tear gas and rubber bullets at anti-government protesters who refused to disperse. Another 14 people were injured in those clashes which police said involved protesters throwing bricks and petrol bombs.

In a statement, the Hong Kong government said "some radical protesters initiated a series of violent acts ... despite repeated warnings" by the police.

"This is absolutely unacceptable to Hong Kong as a society that observes the rule of law," the statement said, referring to the acts of the subway attackers as well as the protesters. 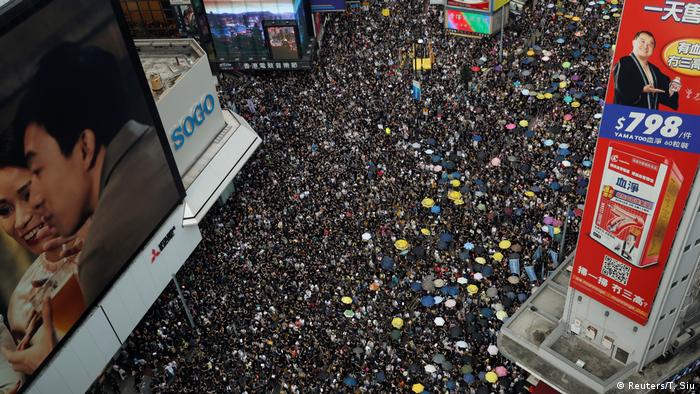 In scenes similar to those that have taken place in the past few weeks, tens of thousands of people on Sunday rallied in the streets of Hong Kong — emboldened by their victory in forcing the regional government to suspend plans to extradite criminal suspects to mainland China.

Protesters marched from Victoria Park, in the bustling shopping district of Causeway Bay, to the nearby Wan Chai area.

Later, many of the demonstrators pressed past the designated end point, despite orders from police to disperse immediately.

They then occupied a major road next to the Legislative Council, and a large crowd gathered outside the police headquarters.

Some of the demonstrators wore masks; others threw eggs at the walls of the Liaison Office, the Chinese government's agency in Hong Kong.

The Hong Kong and Chinese governments condemned the attack on the Liaison Office.

Separately, Hong Kong authorities on Friday night claimed to have seized a large cache of explosives,  further stoking security fears. Three people have since been arrested, with police describing the find as the largest ever of its kind in Hong Kong.

Police said it was unclear whether the explosives were related to the protests. However, one of those arrested was a member of a small pro-independence party.

The demonstrations that started last month have since morphed into a wider movement demanding more autonomy. Many residents say Chinese leaders have encroached on promises made when Hong Kong was handed back to China by Britain in 1997.

Under the "One Country, Two Systems" principle, Hong Kong has retained extensive freedoms not enjoyed on the mainland.

Protest organizers say China is now seeking to control the territory. In response to this perceived threat, protesters have widened their demands to include the introduction of universal suffrage and a halt to the erosion of freedoms. Taiwan's foreign minister, Joseph Wu, on Monday called for "genuine" democratic elections.

"It's sad to see the rule of law eroding and the divide between the people and the government widening in Hong Kong," Wu said in Denver en route to a Caribbean visit. "The way forward is genuine democratic elections, not violence in the streets and [train] stations."

On Saturday, supporters of China's government staged a counterdemonstration, calling on authorities to "restore order" following weeks of disruption that the government says is already impacting tourism. 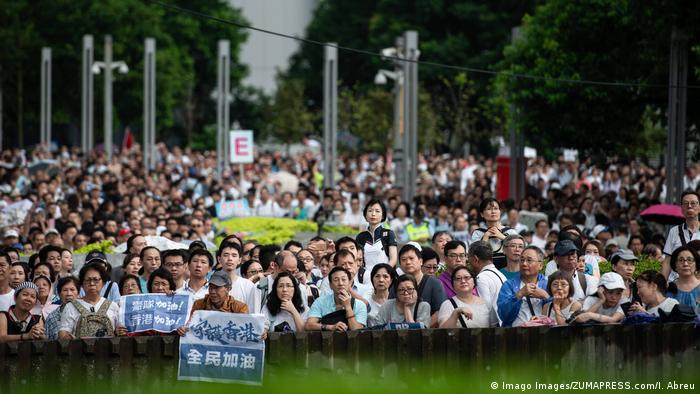 More than 100 firms have applied to list on the STAR market, which is expected to channel billions to the tech sector. China's past failures at creating its own Nasdaq are prompting some investors to tread with caution. (19.07.2019)