Leader Carrie Lam has admitted defeat over her extradition bill, but opponents want her gone. With protests to continue, will Beijing intervene? DW's Conflict Zone meets Ronny Tong, an adviser to Lam.

The threat of Chinese military intervention in Hong Kong is "a fact," an adviser to leader Carrie Lam has told DW.

Speaking to host Tim Sebastian in Hong Kong, Ronny Tong, a member of the territory's Executive Council, said he hoped it would never happen but it was a "political reality."

Tong had warned in a recent interview that it was a remote risk but denied he had tried to frighten people by suggesting Chinese troops could move to stop the protests.

"It's a fact. Everyone understands that except you," Tong told Sebastian during a heated discussion of recent events in the Chinese Special Administrative Region.

The former British colony was returned to Chinese control in 1997 under an agreement between London and Beijing. That deal made China responsible for the territory's security but guaranteed local autonomy under the "one country, two systems" principle.

"Under the basic law there is provision for the Beijing government to interfere. Nobody hoped that it would happen. I'm trying to say that we are trying our utmost to avoid this happening," said Tong. 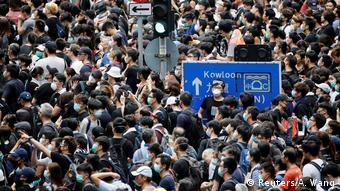 Protesters have said they will continue to demonstrate, despite the government's attempts to reassure them they would not pursue the bill any further

Shortly after the interview was recorded, Chief Executive Carrie Lam announced that her extradition bill was "dead" following weeks of occasionally violent protest.

Hundreds of thousands of people had demonstrated against plans that international human rights lawyers have said would "fundamentally imperil the operation of the rule of law."

Lam's opponents have accused her of playing with words over the status of the bill and repeated calls for her to step down. But the chief executive's adviser disagreed that she should go.

"The bill has got nothing to do with any of the freedoms or core values of the people in Hong Kong. If that is so, why should the chief executive resign?" Tong said on DW's political interview show Conflict Zone.

He admitted that the government had not explained the bill well enough and blamed the short consultation period, just 20 days, on its attempt to pass the bill before the suspect in a prominent murder case was released.

"Now that is not ideal, I accept. But this is not the sort of thing that you say that, because it's a huge mistake, therefore the chief executive ought to resign."

Tong went on to say that the government would "change its ways" and "listen more and try to gauge more public opinion."

The bill would close a "loophole," said its proponents, and make extradition possible where there had been no arrangements, including to mainland China.

But Malcolm Rifkind, the UK foreign secretary at the time of Britain's handover of Hong Kong to the Chinese in 1997, said existing arrangements were not a loophole but a "necessary firewall to ensure that Hong Kong's judicial independence remains intact."

Lam's senior adviser told Sebastian that the government proposals would require assurances of an open trial, visitation rights and other standards set out in Article 14 of the International Covenant on Civil and Political Rights. The chief executive didn't have the power to order extradition but would veto requests that didn't meet these standards, he said. 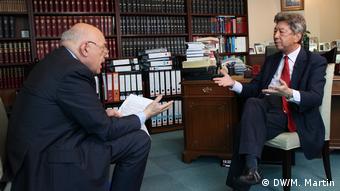 But Sebastian asked how likely it would be that the chief executive, who is backed by Beijing, would veto a request from China.

"Has she ever order an extradition of any suspect to China? Has she?" Tong asked. "I tell you that there has not been a single occasion that that happened."

"We're talking about when it does happen," said Sebastian.

"It's not going to happen because the law prevents her from doing so," Tong said.

More than a million Hong Kongers have taken to the streets to protest against a Beijing-backed extradition bill. But are the rallies more about public anger toward China's role in the city's affairs? (13.06.2019)

Protesters smashed into Hong Kong's legislature building ahead of a pro-democracy rally that is expected to draw hundreds of thousands. Tensions are running high over a controversial bill to allow extraditions to China. (01.07.2019)

A pro-Beijing lawmaker tells DW’s Sarah Kelly that freedoms have been tightened in Hong Kong under the national security law, but the world is "overreacting" to the recent mass arrest of pro-democracy activists.