Chief Executive Carrie Lam has apologized for her handling of the contentious extradition bill after protesters called for her resignation. The city's leader has put the plans on hold, but won't withdraw them completely. 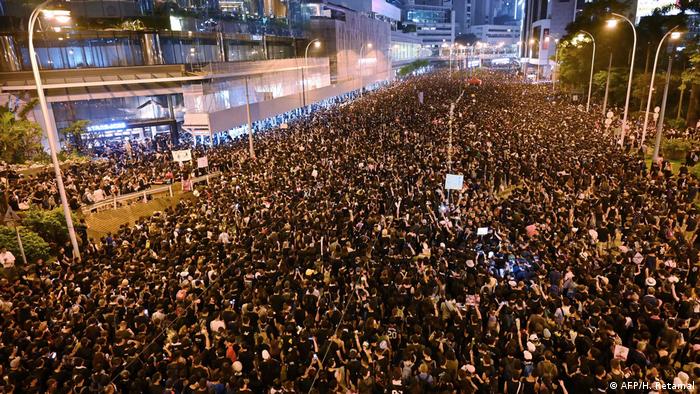 Protesters, mostly in black, jammed the streets Sunday demanding that Hong Kong's leader step down even after she suspended work on a controversial extradition bill.

The crowds, walking slowly and shouting "withdraw" and "resign," spilled into the streets from downtown Victoria Park in the early afternoon and began marching toward the Central district, where the government headquarters is located. The rally continued until late on Sunday night.

"Our demands are simple. Carrie Lam must leave office, the extradition law must be withdrawn and the police must apologize for using extreme violence against their own people," said bank worker John Chow as he marched with a group of his friends.

Hong Kong Chief Executive Carrie Lam on Saturday buckled under the pressure of sometimes violent protests over the past week and indefinitely shelved the bill in order to "maintain law and order and restore calm as soon as possible." However, the proposals have not been completely withdrawn.

In response to Sunday's renewed protests, the government apologized for its handling of the crisis.

"The chief executive acknowledged that the lack of government work has caused great contradictions and disputes in the community of Hong Kong," it said in a statement.

"Many members of the public are disappointed and saddened. The chief executive apologizes to the public and promises to accept it with the utmost sincerity and humility."

The bill proposed a legal mechanism to allow Hong Kong residents and Chinese or foreign nationals traveling through the city to be extradited to mainland China. Lam argued that it would prevent criminals from seeking to hide in the financial hub.

But critics believe it would tighten Beijing's grip on the autonomous city, which is governed under a "one country, two systems" policy cemented during the British handover of Hong Kong in 1997.

While Lam said the bill had "laudable objectives" in combating international crime, protesters are concerned that an extradition agreement would allow Hong Kongers to be handed over to courts controlled by the Communist Party in mainland China, where a fair trial is not guaranteed.

Bill 'must be withdrawn'

Some opponents of the extradition bill said that suspension was not enough.

"The bill's legislative process is only suspended, but not completely withdrawn, which means there is a possibility that the government could restart the legislative process at some point in the future," Ray Chan, a pro-democracy legislator in Hong Kong, told DW.

Lam avoided answering questions about whether she would yield to some protesters' demands that she resign, requesting that citizens "give us another chance."

The Beijing-appointed Lam added that she felt "deep sorrow and regret that the deficiencies in our work and various other factors have stirred up substantial controversies and disputes in society."

A new generation takes to the streets in Hong Kong

Opposition to the extradition bill came from broad sectors of society, including the business community, professionals, teachers, students, pro-democracy figures and religious groups.

Hong Kong is a special administrative region of the People's Republic of China. Hong Kong's constitution, known as the Hong Kong Basic Law, grants the city a high level of autonomy, including executive and legislative powers and an independent judiciary.

While speaking to reporters on Saturday, Lam addressed concerns that the territory's chief executive was being steered by the Central Committee in Beijing, saying that such an assertion was based on a misunderstanding. 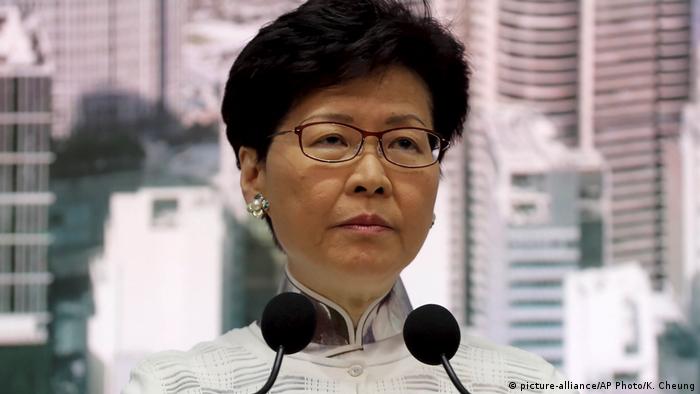 Lam said she made the decision to suspend the bill.

"That is a view that does not sit well with Basic Law, and is not in line with the constitutional role of chief executive," said Lam, adding that the Hong Kong executive was responsible both to the PRC and Hong Kong.

"The central people's government has confidence in my judgment and they support me," she said.

A court in Hong Kong has found several leaders of the 2014 "Umbrella Movement" guilty of incitement. The pro-democracy protest movement brought parts of the China-ruled city to a standstill for weeks. (09.04.2019)

Thousands of protesters descended on the government headquarters and blocked at least two major roads in central Hong Kong to oppose a new extradition bill. The bill's second reading was delayed due to the demonstration. (12.06.2019)

Opinion: Hong Kong unrest has no end in sight

The Hong Kong government has put a controversial extradition law on ice. But the government's suspension will not solve the unrest, it only means a temporary respite, says DW's Philipp Bilsky. (15.06.2019)