Thousands of protesters descended on the government headquarters and blocked at least two major roads in central Hong Kong to oppose a new extradition bill. The bill's second reading was delayed due to the demonstration.

Authorities in Hong Kong delayed the second reading of the controversial extradition bill after crowds of protesters blocked access to the assembly on Wednesday. The session would be held at "a later time to be determined," according to a statement from the government's press service.

The move marks a victory for the opponents of the bill that would allow the former UK colony to extradite detainees to mainland China.

Thousands of people crowded the area around the city's Legislative Council and blocked two major roads in front of the city's seat of government on Wednesday morning. The protesters overturned metal barriers erected by the police and tussled with security forces, as the officers used pepper spray and warned the crowd they would use force if the disorder continued.

After clashes broke out, police fired rubber bullets and tear gas at demonstrators.

Later on Wednesday, officials announced they had delayed the start of the legislative session because of the protests.

Lokman Tsui, a professor at the Chinese University of Hong Kong, told DW the mood on the streets was "intense and serious."

"At the same time it is encouraging and supportive. I participated in the 2014 Occupy Movement and I was very touched when I saw a cupboard that said ‘I’m so happy to see you all again’," Tsui said.

In a video message, Matthew Cheung, the city's chief secretary, called on the protesters to disperse in the first official reaction to the demonstrations.

"I also urge citizens who have gathered to show restraint as much as possible, disperse peacefully and do not defy the law," he said.

Later, Chief Executive Carrie Lam, who was elected under controversial new constitutional reforms, denounced the protests as an "organized riot," according to French news agency AFP.

British Foreign Secretary Jeremy Hunt urged the authorities in Hong Kong to show restraint and to engage in a dialogue with protesters.

"I urge the Hong Kong government to listen to the concerns of its people and its friends in the international community and to pause and reflect on these controversial measures," Hunt said.

"It is essential that the authorities engage in meaningful dialogue and take steps to preserve Hong Kong's rights and freedoms and high degree of autonomy, which underpin its international reputation."

Most of the protesters were young people and students.

"We're young but we know that if we don't stand up for our rights, we might lose them," 18-year-old protester Jacky told the AP news agency.

Activist Lokman Tsui believes that the protesters are dealing with the issue realistically. "It is quite different from the 2014 Occupy Movement because the younger generation is stronger and smarter," Tsui told DW.

Ray Chan, a pro-democratic legislator, told DW that Hong Kong democrats have been asking for a meeting with Chief Executive Lam, but the government has so far refused it. "If Lam wants the protesters to end their occupation, she should either withdraw the controversial bill or at least suspend it," Chan said.

City at a standstill

Teachers' unions said they were planning to strike on Wednesday, and other reports spoke of students boycotting classes to attend the rallies. Members of the Hong Kong Confederation of Trade Unions were encouraged to take sick leave, a union representative told the German dpa news agency. More than 1,000 businesses also pledged to take a day off in order to boost the protest in front of the Legislative Council building.

Several big banks in the Asian financial hub, including HSBC, have agreed to flexible work arrangements, according to Hong Kong media.

The Wednesday protest comes three days after a massive rally against the extradition bill, with organizers claiming a million people attending the Sunday event. The police estimated 240,000 participants. 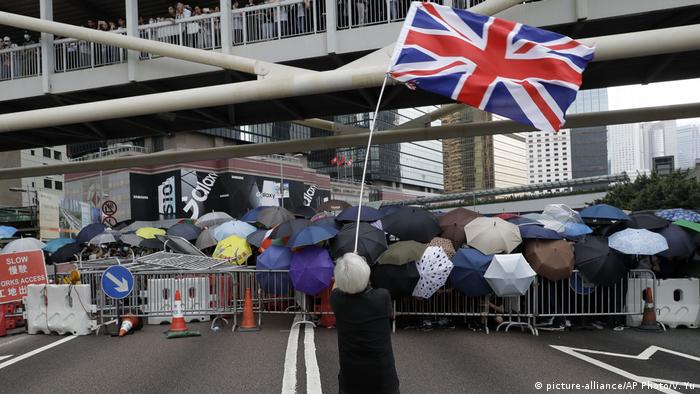 Hong Kong was a British colony until 1997

As democrats are outnumbered by pro-Beijing legislators in Hong Kong's Legislative Council, Chan believes the only way to stop the administration from passing the controversial bill is mass protests. "While we can keep trying to delay legislative sessions, we hope that citizens will keep the pressure on the government through different channels," Chan said.

Despite the scope of the protests, Chief Executive Lam remained defiant and pledged to push through the document, which she says closes important "loopholes" in extradition procedures. She also warned the opponents against committing "radical acts" and said her administration was amending the bill to safeguard human rights.

The bill was allegedly prompted by a murder that took place last year, when a Hong Kong man reportedly killed his girlfriend while on holiday in Taiwan. Hong Kong does not have an extradition deal with Taiwan. The new bill would enable extraditions to places like Taiwan and mainland China.

Taiwan authorities, however, are against any change to the extradition law. Hong Kong lawmakers are to attend the second reading of the bill on Wednesday and hold a final vote on June 20.

DW reporter Willam Yang contributed to this story from Taipei.