Police have clashed with protesters in Hong Kong during a massive rally against a bill to extradite prisoners to mainland China. Organizers claim more than 1 million people took part in the demo.

Hundreds of thousands of Hong Kong residents marched through the city on Sunday to protest a government plan that would allow extraditions to authorities in mainland China.

While the march was mostly peaceful, several hundred protesters clashed with police outside the city's parliament late in the day. The protesters charged police lines and hurled bottles in an attempt to force their way into the building, prompting police to use pepper spray to push them back.

Small groups of protesters pledged to camp out outside the assembly until Wednesday, when the disputed extradition bill is scheduled to have a second reading. However, they were cleared by the police when their permission to protest expired at midnight.

The event was one of the largest demonstrations in Hong Kong's history, with police estimating at least 240,000 participants. But organizers said around 1 million people took part.

In February, Hong Kong authorities proposed that the city's chief executive, Carrie Lam, be given powers to send fugitives and suspects to jurisdictions not covered by existing arrangements, including to mainland China and Taiwan. Current arrangements exclude China because of its poor legal and human rights record.

The proposed extradition law is one of the most controversial pieces of legislation in Hong Kong since a 2003 national security bill, which was scrapped by the authorities after at least half a million residents took to the streets to oppose it.

Organizers believe a large protest could force the government to shelve the controversial law.

James To, a veteran Democratic Party lawmaker, told Reuters on Saturday that a big turnout on Sunday could sway Hong Kong's government. "It could really force a severe rethink by the government," he said. "There is everything to play for … People really sense this is a turning point for Hong Kong."

But late on Sunday, the government said legislators should go ahead with the bill's second reading on Wednesday.

A previous rally in April drew at least 130,000 protesters, according to the Civil Human Rights Front.

Citizens speak out against the bill

Andy Chan, a pro-independence political activist and a founding member of the Hong Kong National Party, told DW that passing the bill would be a "big blow to Hong Kong."

Chan said he may have to leave the territory for his own safety, before acknowledging that "obtaining asylum in other countries is not an easy task and Hong Kong is my home."

Protester Hero Poon described the proposed law as "the worst ever." He said with China's "99% conviction rate," compared to Hong Kong's strong legal system, the extradition law might be used to prosecute political prisoners.

Those sentiments were echoed by Mrs. Hui, who moved from the mainland to Hong Kong 20 years ago. Describing China's legal system as "harsh and terrible," she told DW: "I have to oppose it [the extradition bill]."

However, Christopher Cheung, a member of the Legislative Council of Hong Kong, supports the law change. He told DW that if the bill does not pass, Hong Kong could become "a criminal's paradise."

Hong Kong expats have planned protests in 28 cities around the world, including Taipei, where more than 100 students gathered on Sunday.

"In the future, I'm afraid that Hong Kong's outspoken young people would have to flee overseas like me," said Lam Wing Kei, the former owner of Causeway Bay Books, a Hong Kong bookstore famous for selling books on China's banned literature and history. 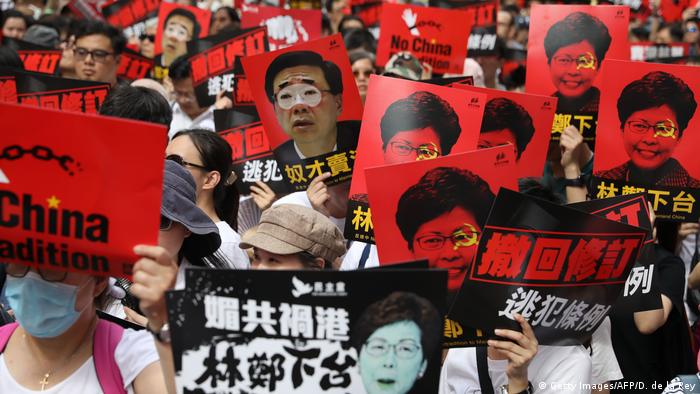 Hong Kong authorities have come under immense pressure from the international community to ditch the extradition bill. The foreign ministers of Germany and the UK have spoken against the bill, while 11 European Union envoys recently met Chief Executive Lam to formally protest the law.

The International Chamber of Commerce to the EU office in Hong Kong and the US-China Economic and Security Review Commission also voiced serious concerns about the controversial extradition bill.

On Saturday, the US State Department said that it was "closely monitoring" the Hong Kong government's proposed amendments to the law.

Are the amendments necessary?

Some protesters are even calling for Lam to step down, saying she has "betrayed" the city. But Lam insists the changes to the extradition law are necessary to close the "loophole" under which the government has been unable to extradite a Hong Kong citizen, Chan Tong-kai, who is accused of killing his girlfriend in Taiwan last year.

Taiwan authorities, however, are against any change to the extradition law. They said Friday they have no intention of asking Hong Kong to return Chan because they are concerned the proposed extradition law changes would put its citizens at risk of being taken away by China.

Lee Ming-che, a Taiwanese activist, is currently serving a five-year sentence in China after being convicted by a Chinese court in November 2017 on charges of subverting state powers.

"Hong Kong people and visitors passing by Hong Kong will lose their right not to be extradited to mainland China," Leung said. "They would then face an unjust legal system on the mainland."

Chinese authorities have clamped down on pro-democracy demonstrations in recent years. Last September, the government banned the pro-independence Hong Kong National Party (HKNP). Its leader, Andy Chan, was disqualified from running for elections, after officials insisted that advocating for independence goes against the territory's Basic Law.