The "Umbrella Movement" leaders organized 79 days of pro-democracy protests in the semi-autonomous Chinese territory in 2014. The group wanted Hong Kong voters to have the right to choose the city's leader. 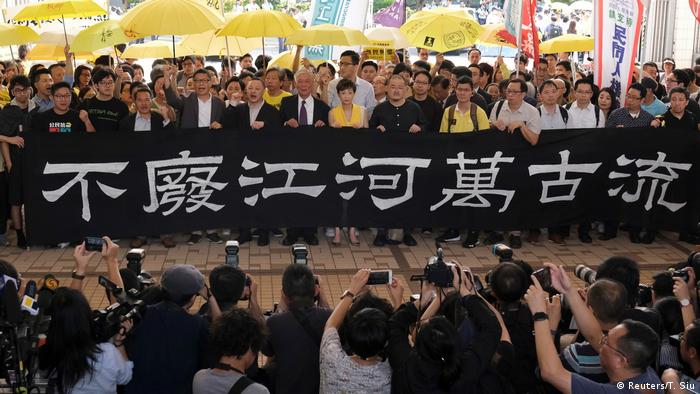 A court in Hong Kong handed down sentences of up to 16 months to eight leaders of the city's "Umbrella Movement" on Wednesday, a month after they were found guilty of organizing a 79-day pro-democracy protest in 2014.

The movement had demanded Hong Kong's 5 million voters be given the right to choose the leader of the semi-autonomous Chinese territory.

What were the sentences?

Brain tumor postpones sentence: The court delayed the sentencing of the last remaining defendant, Tanya Chan, for six weeks because the 47-year-old activist is due to undergo surgery for a brain tumor.

Crossing the line: The latest sentences set a new precedent, according to another "Umbrella Movement" leader, Joshua Wong.  "Previously, none of us imagined we might be jailed for more than a year, but now you never know," he told the DPA news agency.

The jail terms passed on Wednesday are the harshest punishments yet for anyone involved in the 2014 protest movement. Activist Raphael Wong, who was sentenced to eight months, remained defiant after the ruling. "Our determination to fight for democracy will not change," he said while he was led away by guards.

In Taiwan, government officials slammed Beijing for not adhering to the "one country, two systems" principle, which guaranteed special rights to Hong Kong after it was returned to China in 1997. The model is set to expire in 2047.

"The whole world is watching the application of the 'one country, two systems' principle in Hong Kong. Our nationals won't be cheated either," Taiwan's Mainland Affairs Council said in a statement.