A court in Hong Kong has found several leaders of the 2014 "Umbrella Movement" guilty of incitement. The pro-democracy protest movement brought parts of the China-ruled city to a standstill for weeks. 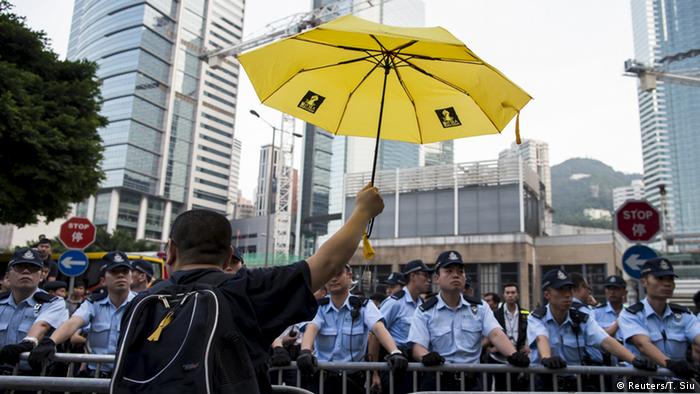 A Hong Kong court on Tuesday found the top leaders of the "Umbrella Movement" guilty of conspiracy to commit public nuisance and incitement for their roles in the 2014 pro-democracy demonstrations.

The trial has sparked concerns about the erosion of political freedoms in the semi-autonomous Chinese city.

'Continue the struggle for democracy'

One of the defendants, former student leader Tommy Cheung, 25, told DW the "helplessness" would not last: "Today is not the end, but a new beginning," he said.

Another activist on trial, 31-year-old Raphael Wong, appealed to Hong Kong's residents to keep pushing for democracy. "The hope lies in the people themselves. The smallest changes require protests," he told DW.

Fellow defendant Shiu Ka-chun, 50, said that the "sun would rise again" and reach every corner where democracy does not yet exist.

Ahead of the verdict, the campaigners vowed to continue pushing for democracy in Hong Kong, regardless of the trial's outcome.

"We will still continue our struggle for democracy," professor Benny Tai told Reuters news agency ahead of the verdict. "The reason that we committed civil disobedience is because we want justice for Hong Kong people."

What were the protests about?

The protests, which were spearheaded by three of the defendants in Tuesday's trial, called for free elections for Hong Kong's leader.

Over the course of the 79-day protests in 2014, mass demonstrations paralyzed Hong Kong's financial district and highlighted widespread frustration over the shrinking of the city's civil liberties.

Concerns over China's influence: Hong Kong enjoys a degree of autonomy and civil liberties that are protected under an agreement between Britain and China. Ever since the city returned from British to Chinese rule in 1997, rights groups have voiced concerns that those freedoms are being eroded under China's influence.

Two professors and a retired pastor have appeared before a Hong Kong court over their role in the 2014 Occupy movement for free elections. The trio might face long prison terms on public nuisance charges. (19.11.2018)