A fight broke out between pro-democracy and pro-Beijing lawmakers in Hong Kong's Legislative Council. The proposed law would permit extraditions to China despite the Chinese government's poor human rights record. 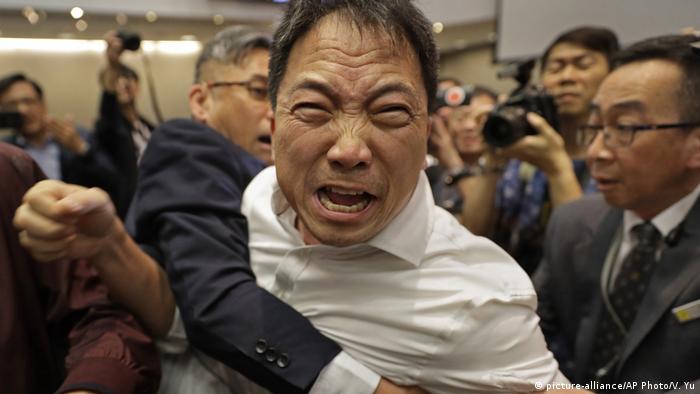 Hong Kong lawmakers scuffled with each other on Saturday over the government's proposed amendments to the territory's extradition law.

At least one member of the Legislative Council was carried from the chamber after fainting, as legislators pushed and shoved each other on the floor.

The meeting to discuss the controversial extradition bill was originally chaired by pro-democracy lawmaker James To, but the pro-China camp unseated To earlier this week and replaced him with their choice of chairman, Abraham Shek.

"We couldn't possibly agree to the suggestion that our meeting chaired by James To should be suspended in any way, because it is completely constitutional and legal," pro-democracy legislator Claudia Mo said after the meeting.

Pro-Beijing lawmaker Shek insisted it was "legal" for him to chair the session.

In February, the Hong Kong government proposed that the city's chief executive, Carrie Lam, should be given powers to send fugitives and suspects to jurisdictions not covered by existing arrangements, including to mainland China and Taiwan. Current arrangements exclude China because of its poor legal and human rights record. 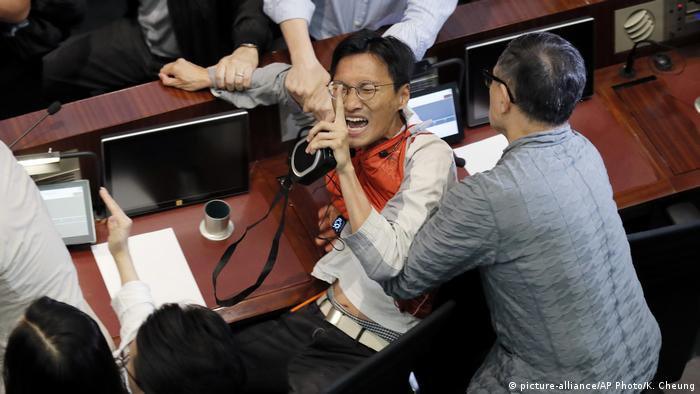 If approved, the proposed changes could become law within the year.

The plan has sparked huge protests in Hong Kong. Last month, thousands of people walked peacefully for more than three hours through the shopping and business districts of Causeway Bay and Wanchai, some with placards addressing the Chinese leader: "President Xi Jinping, no legalized kidnapping of Hong Kong people to China."

Police put the number of those attending at 22,000. Organizers said there were 130,000. This would make it the largest rally since the 2014 Umbrella Movement pro-democracy protests.

"Hong Kong people and visitors passing by Hong Kong will lose their right not to be extradited into mainland China," Leung said. "They would need to face an unjust legal system on the mainland."

Some protesters called for Carrie Lam to step down, saying she had "betrayed" the city.

"Some citizens and overseas organizations might have misunderstandings about the proposed law amendments," Cheung said.

Chief Executive Lam insists that the changes to the extradition law are necessary to close the "loophole" under which the government has been unable to extradite a Hong Kong citizen, Chan Tong-kai, who is accused of killing his girlfriend in Taiwan last year.

Taiwan authorities, however, are against any change to the Hong Kong extradition law. They said Friday that they have no intention of asking Hong Kong to return Chan because they are concerned that Hong Kong's proposed extradition law changes would put its citizens at risk of being taken away by China.

Lee Ming-che, a Taiwanese activist, is currently serving a five-year sentence in China after being convicted by a Chinese court in November 2017 on charges of subverting state powers.

Chinese authorities have clamped down on pro-democracy demonstrations in recent years. Last September, the government banned the pro-independence Hong Kong National Party (HKNP). Its leader, Andy Chan, was disqualified from running for elections, after officials insisted that advocating for independence goes against the territory's Basic Law.