The Hong Kong government has proposed to grant the city's leader powers to extradite fugitives to mainland China. Rights activists say China critics could be subject to torture and unfair prosecution there. 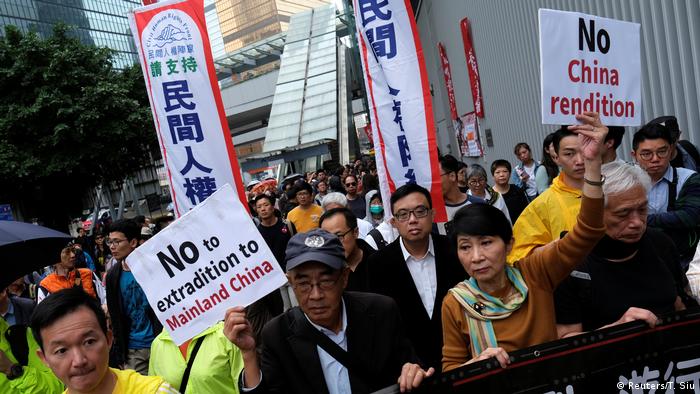 Thousands of people in Hong Kong took to the streets on Sunday to protest a government plan to change the city's extradition laws. Rights activists and business leaders fear the proposed amendments would erode personal freedom and Hong Kong's status as an international business hub.

In February, the Hong Kong government proposed that the city's chief executive should be given powers to send fugitives and suspects to jurisdictions not covered by existing arrangements, including to mainland China and Taiwan.

Current arrangements exclude China because of its poor legal and human rights record.

The government plans to present the amendments to legislators on Wednesday.

A 'risk for China critics'

"These amendments would heighten the risk for human rights activists and others critical of China being extradited to the mainland for trial on fabricated charges," Sophie Richardson, China director at Human Rights Watch, said in a statement on Sunday.

"The amendments would tarnish Hong Kong's reputation for the rule of law, and should be scrapped," she said, adding that the proposal puts Hong Kong people "at risk of torture and unfair trials."

Human Rights watch sent a letter to Hong Kong's Chief Executive Carrie Lam urging her not to go ahead with extradition amendments.

"Hong Kong people all have to bear the negative consequences of this ordinance. This carries the risk of personal freedom being restricted," Lam Wing-kee, a bookseller who was allegedly detained by Chinese agents in 2016, told the Sunday rally participants.

Chinese authorities have clamped down on pro-democracy demonstrations in recent years. Last September, the government banned the pro-independence Hong Kong National Party (HKNP). Its leader, Andy Chan, was disqualified from running for elections, officials insisting that advocating for independence goes against the territory's Basic Law.

EU mulls response to Russia's arrest of Navalny 31m ago