City leader Carrie Lam said in a press conference her government would indefinitely 'suspend work' on the bill. The proposed law has triggered the biggest protests in the city since its British handover in 1997. 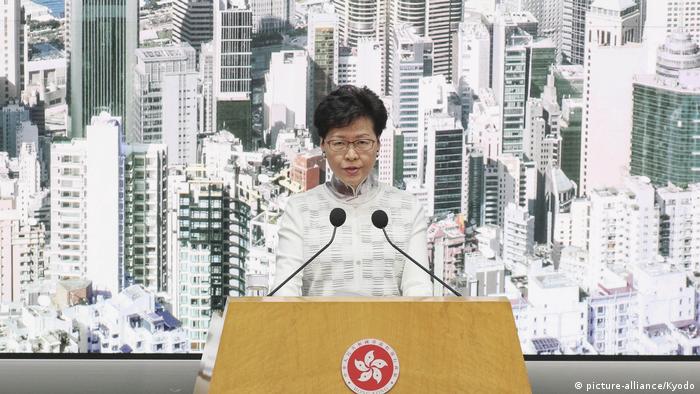 Hong Kong's government announced on Saturday a delay to an extradition bill that had triggered the biggest protests in the Chinese city since its handover from Britain in 1997.

Hong Kong Chief Executive Carrie Lam addressed reporters following a meeting with pro-Beijing lawmakers, including some who urged her to back down on the proposed law.

"We have to maintain law and order and restore calm as soon as possible. We should pause and think instead of resuming the second reading of the bill as scheduled in the legislative council," Lam told a press conference on Saturday.

Lam said that the next steps would be decided in consultation with various parties, but added that there was "no intention" to set a deadline for the work.

The bill proposes a legal mechanism to allow the extradition of Hong Kong residents and Chinese or foreign nationals traveling through the city to mainland China. Hong Kong leader Lam argues that it would prevent criminals from seeking to hide in the financial hub.

"We can't be a refuge for fugitive offenders," Lam said on Saturday.

But critics believe it would tighten Beijing's grip on the autonomous city, which is governed under a "one country, two systems" policy cemented during the British handover of Hong Kong in 1997. 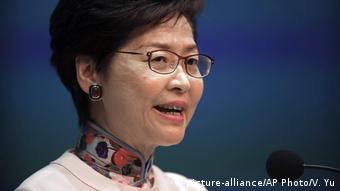 Before the protests, Hong Kong leader Carrie Lam was adamant about pushing the bill through parliament

Hong Kong is a so-called "special administrative region" of the People's Republic of China (PRC). Hong Kong's constitution, known as the Hong Kong Basic Law, grants the city a high level of autonomy, including executive and legislative powers and an independent judiciary.

However, Hong Kongers fear an erosion of their rights and civil liberties guaranteed under the Basic Law.

These rights include freedom from arbitrary detention, freedom of assembly and freedom of the press. The press conference held by Lam, during which international reporters could freely question the chief executive, would hardly have been possible in mainland China.

While speaking to reporters on Saturday, Lam addressed concerns that Hong Kong's chief executive was being steered by the central committee in Beijing, saying that such an assertion was based on a misunderstanding.

"That is a view that does not sit well with Basic Law, and is not in line with the constitutional role of chief executive," said Lam, adding the Hong Kong executive was responsible both to the PRC and Hong Kong.

"The central people's government has confidence in my judgement and they support me," she said.

Suspension is not enough?

Although Lam said the bill had "laudable objectives" in combating international criminality, protesters are concerned that an extradition agreement would allow Hong Kongers to be handed over to courts controlled by China's Communist Party in mainland China, where a fair trial is not guaranteed.

Ray Chan, a pro-democracy legislator in Hong Kong, told DW that he believed most of the people in Hong Kong wouldn't approve of most of the explanations presented by Lam during the press conference.

Verna Lau, a high school student who was at the protests, said she fears that the rights enjoyed in Hong Kong would disappear if the bill is passed.

"I used to actively criticize the government on social media, but since the introduction of the controversial bill, I start to fear for my safety and exercise self-censorship," she told DW. 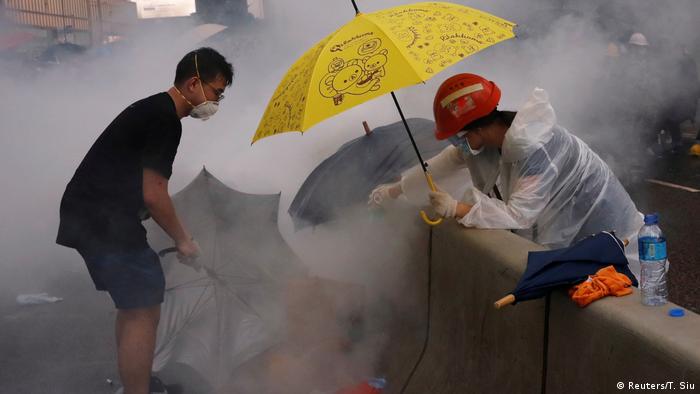 Last Sunday, hundreds of thousands of protesters took to the streets to call on the government to withdraw the proposed law, prompting a heavy-handed crackdown, with police using tear gas and rubber bullets to disperse crowds.

On Wednesday, the protests turned violent and clashes with police left around 80 people injured, including 22 police officers.

More protests are expected for Sunday, and local media reported that they would continue on as planned. Lam said that the executive's decision was made to restore calm as fast as possible, and was not in response to the threat of more protests.

"Our decision has nothing to do with what may happen tomorrow," she said.

"I believe her speech won’t reduce the size of tomorrow’s protest, because I think the messages from the press conference would only make people even angrier," said pro-democracy legislator Chan.

"I don't think many Hong Kong people, who were enraged by the police violence on Wednesday, would choose to accept what she said earlier and stay away from tomorrow's protest."

With additional reporting by DW's William Yang in Hong Kong

Police have clashed with protesters in Hong Kong during a massive rally against a bill to extradite prisoners to mainland China. Organizers claim more than 1 million people took part in the demo. (09.06.2019)

City leader Carrie Lam said in a press conference her government would indefinitely 'suspend work' on the bill. The proposed law has triggered the biggest protests in the city since its British handover in 1997. (15.06.2019)