The center of Hong Kong remained tense as opposition to the draft extradition bill allowing people to be sent to China continued. International concerns have also been expressed. Hong Kong's Chief Executive Carrie Lam condemned the violence late on Wednesday and called for a swift restoration of order as Thursday's debate of the controversial bill to allow extradition to China was put on hold for another day.

Lam refused to withdraw the bill which she said was needed to close "loopholes" allowing criminals wanted on the mainland to hide out in Hong Kong.

On Thursday morning, some protesters did brave the rain as street cleaners worked to clear the debris from the previous days' demonstrations. 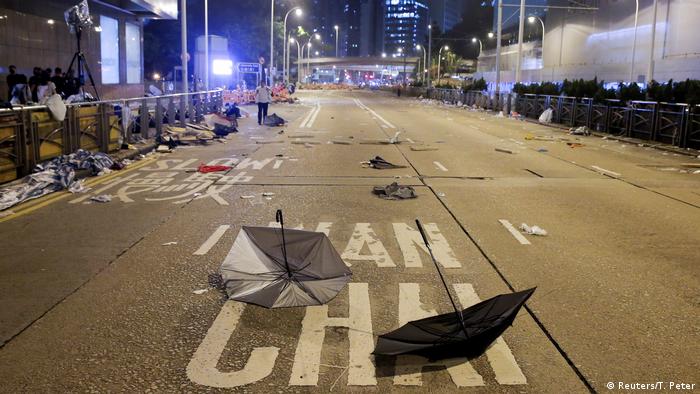 Umbrellas on the street from the demonstration against the bill

Central government administrative offices were to be closed in the financial district on Thursday and Friday, workers in Hong Kong were told.

A shopping mall and several banks near the legislature were also closed. Uniformed police stood near a long line of police vans as plain-clothed police checked commuters' identification.

A huge demonstration on Sunday and then further street rallies during the week have prevented debate on the extradition bill being held. Wednesday night was the third night of violent protests since Sunday's rally of more than a million people out of a population of 7.4 million, the largest since the 1997 handover of control from the British to Hong Kong authorities. 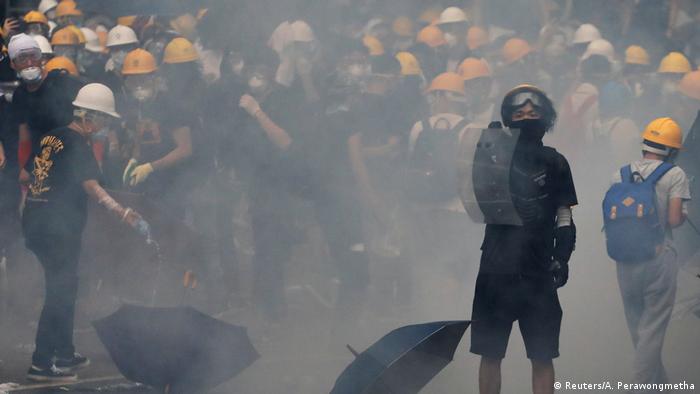 Hongkong protests continued through the week

The European Union added its voice to the criticism of the extradition bill and called for citizens' rights to be respected. The EU "shares many of the concerns raised by citizens of Hong Kong regarding the government's proposed extradition reforms", it said in a statement.

The law has "potentially far-reaching consequences for Hong Kong and its people, for EU and foreign citizens, as well as for business confidence in Hong Kong."

The UN's Human Rights Office spokeswoman said: "We call on all parties to express their views peacefully and on Hong Kong's authorities to engage in an inclusive and transparent dialogue over the draft legislation."

More than one million people took to Hong Kong's streets on Sunday to protest the new extradition-to-China law. What they're calling for is totally legitimate, says Alexander Görlach. (12.06.2019)

Beijing warned against "outside interference" in Hong Kong politics as it promised to support the city's government. Hundreds of thousands took to the streets to demand parliament nix the controversial law. (10.06.2019)