More than a million Hong Kongers have taken to the streets to protest against a Beijing-backed extradition bill. But are the rallies more about public anger toward China's role in the city's affairs? 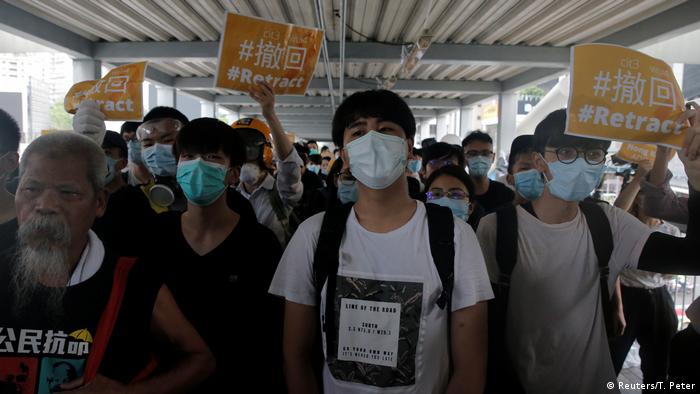 Hong Kong's controversial extradition bill has triggered the biggest protests in the former British colony since the United Kingdom handed it over to China in 1997. Wednesday's rallies included violent clashes with police after more than a million turn out to denounce the bill on Sunday.

The proposal would allow extraditions to mainland China, which is not covered by an extradition treaty because of its poor legal and human rights standards. Demonstrators fear it could threaten the safety of Hong Kong residents, who enjoy many freedoms and rights that their mainland counterparts do not.

Yet Bernhard Bartsch, a China expert at the Bertelsmann Foundation, told DW that the protests were not primarily about the bill. "This is about them voicing their discontent and this discontent is really about China," he said.

"They are saying you don't represent us and we don't want you to meddle in Hong Kong's affairs as much as you have done over the last couple of years."

In 1997, Beijing pledged to apply the "one country, two systems" principle to Hong Kong for 50 years. Pro-democracy activists have however repeatedly criticized China for encroaching on Hong Kong's legal and political system.

"The Hong Kong government to all intents and purposes is really no more than an extension of the [Chinese] Communist Party," Hong Kong-based activist Kong Tsung-Gan told DW.

In 2014, an announcement by Beijing that it would pre-screen candidates for the city's top leadership post led to more than 100,000 people occupying sites around the city. The rallies became known as the "Umbrella Movement" demonstrations, which were named after the yellow umbrellas that protesters used to protect themselves from police.

Although protesters in 2019 and 2014 share an underlying opposition to Chinese intrusion, the recent demonstrations include a broader spectrum of Hong Kong society, Kong said.

"Lots of them are public housing estate state kids. They don't come from the same socioeconomic background of the university students who were in the forefront of the Umbrella Movement," he said. "They have very poor prospects for decent jobs and decent housing."

'They want absolutely nothing to do with China'

The Umbrella protests failed to stop Beijing's electoral changes. But activist Kong says that while Beijing wants to keep Hong Kong "firmly under its control," it is too soon to say whether the latest protests or the wider pro-democracy movement will fail.

"It all depends on these young people, 80% to 90% of whom say I'm a Hong Kong person and they want absolutely nothing to do with China," he said.

Bertelsmann's Bartsch says that while the "unprecedented" scale of the protests has scared China, the rallies were not "going to end well" for Hong Kong.

"They went after the last generation of protesters really hard," Bartsch said. "One thing that the Beijing government does not accept is a challenge to its authority."

From Germany's perspective, the danger facing opposition activists has become so serious that it can qualify activists for political asylum. Last year, it  granted asylum to two pro-independence activists, Ray Wong and Alan Li, in the first case of a foreign country giving asylum to Hong Kong citizens.