In a controversial ruling, China's top legislative body has effectively banned Hong Kong's two pro-democracy lawmakers from office, a move expected to trigger a new round of anti-Beijing protests in the city. 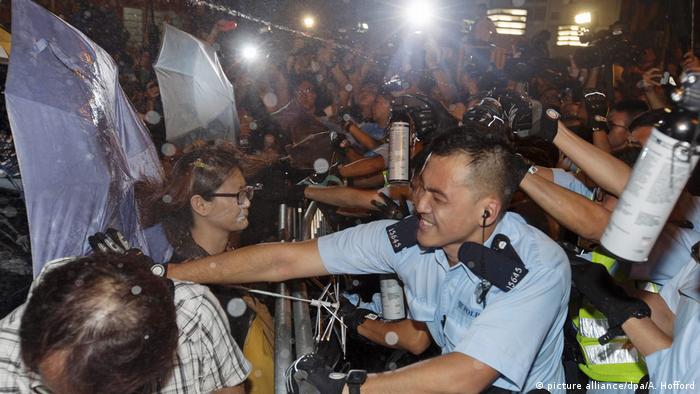 China's parliament has effectively barred pro-independence legislators from the territory's Legislative Council. The move by the Communist party was made through a controversial reading of Hong Kong's constitution. (07.11.2016)

Hong Kong's recent vote saw youth leaders pushing for more autonomy from the mainland gain a crucial foothold in the city's legislature. Experts say Beijing is likely to take steps to tighten its grip over the territory. (06.09.2016)

The NPCSC, which is China's top legislative body, handed out its own verdict on the interpretation of Hong Kong's Basic Law before the local High Court could rule on the issue itself. The move constitutes Beijing's most direct intervention in Hong Kong since 1997, when the territory was handed over to China by Britain.

During the swearing-in ceremony in October, Sixtus Leung and Yau Wai-ching reportedly altered their oaths. Both lawmakers used derogatory terms for China and draped themselves in banners reading "Hong Kong is not China." On Thursday, Hong Kong's High Court ordered an investigation into the legality of their oaths. A day later, China decided to step in.

Beijing has interpreted Hong Kong's mini-constitution, or the Basic Law, in the past, but not without a formal request from Hong Kong's government or its judiciary. It is also the first time that the Standing Committee has stepped in during an ongoing judicial process, undermining the independence of Hong Kong's legal system. The move is seen to have put Hong Kong's special "one country, two states" status in jeopardy which is protected by the Basic Law.

"This is a fundamental clash," Jacques deLisle, a law and political science professor at the University of Pennsylvania, told DW.

Lisle says that from the perspective of pro-democracy forces in Hong Kong, China's ruling "reinforces concerns that Hong Kong is losing autonomy and democracy and is on a path toward a 'one country, one system.'" 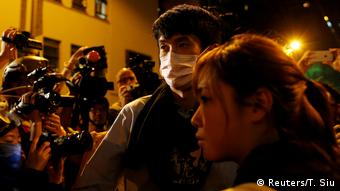 Pro-independence sentiments are already gaining momentum in Hong Kong. Two years ago, massive pro-democracy rallies organized by the "Umbrella Movement" were able to shut down parts of the city for weeks. Prior to the Monday ruling, thousands of protesters had gathered in Hong Kong anticipating the Chinese government's intervention.

Tim Summers, a senior consulting fellow on Asia at Chatham House, believes it is just the beginning of the conflict. "The banning of these two lawmakers will take their supporters back to the streets," Summers told DW.

Hong Kong's parliament, the Legislative Council, has been in turmoil for the past few weeks, following the oath-taking incident on October 12. Both Leung and Yau had referred to China as "Shina," a derogatory term for the country formerly used by the Japanese.

Amidst controversy, Andrew Leung Kwan-yuen, the president of the Legislative Council, offered the two legislators a second chance at oath-taking, but the attempt was hindered by a walkout of pro-establishment lawmakers. In a subsequent meeting, the temporarily barred Leung and Yau stormed into the Legislative Council chamber and tried to take their oaths for a third time. Before they could do so, they were removed from the Council amid scuffles.

Beijing has been keeping an eye on Hong Kong's political scene, fearing that the new developments could harm its unity and authority. But by proactively intervening in the situation, China may have unnecessarily instigated Hong Kong's pro-democracy activists.

A majority of Hong Kong residents did not support the pro-independence lawmakers protest in the Legislative Council. "The people reacted quite strongly against their behavior," underlined Summers. "A majority of the people found it offensive, but it does not mean that people necessarily agree with Beijing's interpretation of the Basic Law," he added.

A demonstration of power

In 1999, two years after China took back Hong Kong's control from Britain, Beijing intervened on the right to residence in Hong Kong, stirring massive criticism from the locals. A similar controversial intervention in 2004 saw Beijing effectively banning Hong Kong from amending the electoral process independently.

Constitutionally, Article 158 of the Basic Law gives Beijing the right to interpretation only if the issue concerns the mainland China or the relationship between Beijing and Hong Kong directly. Furthermore, the interpretation can only be served at the request of the Hong Kong Court of Final Appeal. In practice, all Chinese interventions, except one, took place outside of Beijing's jurisdiction. 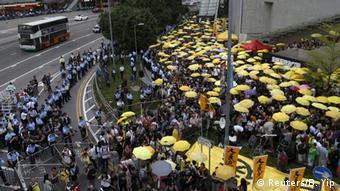 Experts say the latest move shows that China's interventions in Hong Kong have little to do with constitutional formalities; they are fundamentally about the demonstration of Beijing's political power.

The ruling "made clear that the will of China's Standing Committee stands above Hong Kong's judicial independence," pro-democracy activist Cheng Yu-shek told DW.