Protesters have gathered in Hong Kong for a march through the city's tourist district to the high-speed railway station linking it to mainland China. They aim to take their message directly to visitors from the mainland. 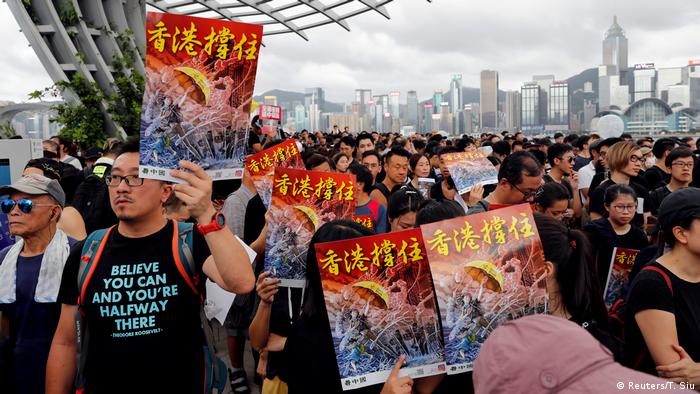 A new pro-democracy march in Hong Kong will see protesters trying to inform outsiders about their goals on Sunday. Thousands of mostly young marchers headed through a popular shopping district in the Kowloon area, which is located across the harbor from the main island.

Protesters chanted "Free Hong Kong" and some of them waved British flags. They later reached the train station that connects the financial hub with dozens of cities in mainland China. Hong Kong was under British rule until 1997.

"The information is rather blocked in mainland, we want to show them the true image and the message of Hong Kongers," said Ventus Lau Wing-hong, one of protest organizers.

The coordinators of Sunday's march are a different group from the organizers behind the series of marches that rocked the former UK colony for several weeks. However, both groups oppose the now suspended bill that would allow extradition of Hong Kong residents to mainland China.

Chinese media outside Hong Kong gave very limited coverage of the protests. The pro-Beijing censors have also portrayed the movement as violent and funded from abroad.

Visitors unaware of the rally

The Sunday demo is set to end at the West Kowloon Station, a terminal for the modern high-speed railway link between Hong Kong and the mainland. The train from West Kowloon takes passengers to the tech hub city of Shenzhen in about 20 minutes, and a trip to Beijing takes nine hours. Some 55,000 people ride the Hong Kong rail every day.

On Sunday, travelers leaving the station told the Reuters news agency they were not aware of the protests and did not know about the extradition bill.

Shanghai businessman Alan Zhang, who is a frequent visitor in Hong Kong, said he received flyers about the march and had information about it, which was shared via Apple's AirDrop service.

"Actually, I feel quite touched to see how Hong Kong people fight for their freedom," the 54-year-old told the agency.

"That's something we can't do in China. I think first-time travelers do not know what is happening right now," he added. "Indeed, it let me see why Hong Kong is different from China."

Ahead of the event, Hong Kong's public transport company MTR said they would close all entrances to West Kowloon Station, except for two, and announced a specific route passengers are meant to take during the protests. Only passengers with ticket reservations were allowed in. Shops selling food and beverages were also to be closed.

Passengers who sought to buy tickets between Hong Kong and Shenzhen reportedly saw them listed as sold out for the expected duration of the protest. The local tourist association also said some travel agencies would take visitors away from the popular Tsim Sha Tsui area on Sunday.

Hong Kong's public broadcaster RTHK said over 1,000 police officers would be on standby.

The Sunday march is the first since demonstrators broke into the main legislative building on Monday. Under pressure from the protesters, Hong Kong authorities suspended the extradition bill, but the marchers demand its full cancellation and the resignation of Hong Kong Chief Executive Carrie Lam.