Protesters smashed into Hong Kong's legislature building ahead of a pro-democracy rally that is expected to draw hundreds of thousands. Tensions are running high over a controversial bill to allow extraditions to China. Hundreds of protesters stormed Hong Kong's legislature on Monday, in demonstrations coinciding with the anniversary of Hong Kong's return to Chinese rule on July 1, 1997.

Clutching umbrellas, a group of black-clad demonstrators used a metal cart to break through the glass doors of the Legislative Council building. Police responded by firing pepper spray and beating some people with batons, but were unable to keep all of them outside the building.

At the same time, tens of thousands of pro-democracy activists marched through downtown Hong Kong against what they said were the city's eroding freedoms. They also demanded the resignation of Chief Executive Carrie Lam, the city's embattled pro-Chinese leader.

The anniversary protests come in the wake of huge demonstrations that drew more than a million people to the streets against a bill that sought to allow extraditions to the Chinese mainland.

As a result, the government postponed debate on the legislation, but protest leaders still want the bill formally withdrawn and for Lam to step down. 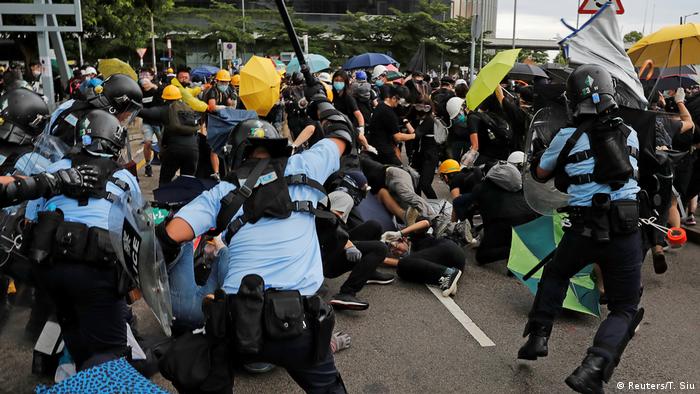 Police tried to disperse protesters who had camped out overnight

Monday's pro-democracy march started in the afternoon at Victoria Park on Hong Kong Island and is set to end at government offices near the heart of the financial center.

The anniversary is considered a public holiday, so financial markets and most businesses are closed.

Earlier on Monday morning, small groups of masked protesters, most of them young, took control of three of the cities main streets, deploying metal and plastic barriers to block the way. Clashes with riot police were reported in the Admiralty and Wanchai districts of the city.

At least 31 protesters and police had been admitted to hospital by the early afternoon, a government spokeswoman said.

The morning disturbances occurred shortly before a government flag-raising ceremony to mark the 22nd anniversary of the city's handover.

The event was officiated by Carrie Lam, who had not been seen in public in more than 10 days. She gave a speech that struck a conciliatory tone.

"What happened in recent months has caused conflicts and disputes between the government and residents," Lam said.

"It has made me fully understand that as a politician, I need to be aware and accurately grasp the feelings of the people," she said.

The July 1 anniversary has been marred by deepening dissatisfaction among many residents about what many see as increasing meddling by China in Hong Kong and the erosion of freedoms.

A former British colony, Hong Kong was returned to China under the "one country, two systems" rule. The formula allows for freedom of protest and lets the autonomous region have an independent judiciary, neither of which is accepted in China.

For a Free Future! Young Hongkongers Rise Up

Upon release, he joined protesters calling for Hong Kong's leader to immediately resign. Joshua Wong has described a controversial extradition bill — the catalyst of mass protests — as an "evil law" he plans to fight. (17.06.2019)

Huge demonstrations in Hong Kong saw a controversial extradition bill shelved, but fears over potential Chinese interference in the self-governing territory continue to raise doubts among business leaders there. (21.06.2019)

Opinion: Istanbul and Hong Kong – a double victory for democracy

You could describe what has happened in Hong Kong and Istanbul as classic cases of authoritarian rulers scoring own goals. Who knows how they will deal with this in the medium term, writes Alexander Görlach. (25.06.2019)