Carrie Lam, the city's chief executive, has said she wants time to "continue to work hard" for the people of Hong Kong. But activists have promised to not back down, with Joshua Wong telling DW: "Now is the time." 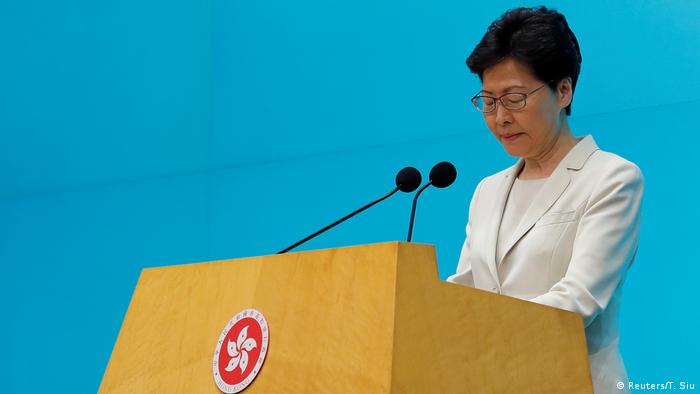 Hong Kong leader Carrie Lam on Tuesday offered a "most sincere apology to all people of Hong Kong" for a political crisis that erupted over a controversial extradition bill.

"I personally have to shoulder much of the responsibility," Lam said. "This has led to controversies, disputes and anxieties in society."

On Sunday, an estimated two million people took to the streets to demand Lam resign and the extradition bill, which would ease extradition to mainland China, be shelved.

However, Lam refused to step down on Tuesday, saying she planned to finish the rest of her term. She added that she wants the chance to "do better" and regain public trust.

'Now is the time'

On Sunday, she offered an apology through a written statement, a move described by activists as insufficient.

Student activist Joshua Wong, who was released from prison on Monday, told DW that he would continue to call for Lam's resignation and an end to the extradition bill.

"Carrie Lam apologizing is useless because the damage has been done," Wong said. "Now is the time for Carrie Lam to step down, bear the political responsibility and withdraw any plans to prosecute activists."

Read more: Hong Kong protests: 'We are fighting against a dictatorship'

Wong was not the only leading activist to suggest Lam's apology was insufficient. Kong Tsung-gan, a writer and activist in Hong Kong, told DW that "Carrie Lam's apology on Tuesday certainly didn't fully address the main demands of Hong Kong protesters."

Plans to pass the bill last week triggered the biggest protests in Hong Kong since its handover from the UK in 1997.

Lam had previously argued that it would prevent criminals from seeking to hide in Hong Kong.

Critics believe it would tighten mainland China's grip on the semi-autonomous city, which is governed under a "one country, two systems" policy. That policy was a crucial part of the UK's handover agreement.