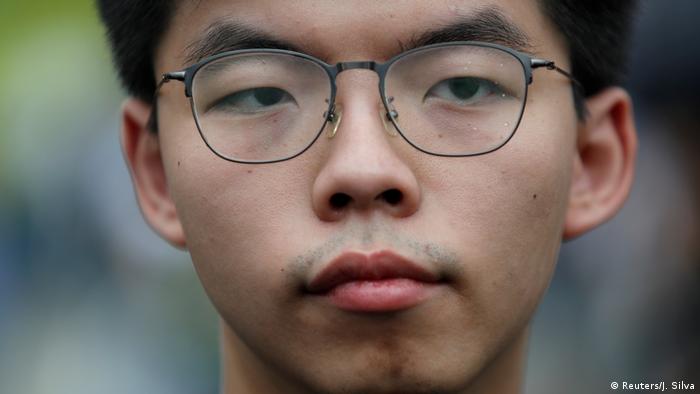 Pro-democracy activist Joshua Wong was released on Monday by Hong Kong authorities, just a day after two million citizens took to the streets to demand the resignation of Chief Executive Carrie Lam. Wong had been sentenced to two months in jail over his role in the 2014 "Umbrella Movement" protests against a Beijing initiative to screen candidates for the city's top executive.

Citizens of the former British colony are currently protesting against an extradition bill, which has prompted outrage and triggered a series of massive rallies. The law, which was introduced by Lam in February, would allow fugitives to be sent to China, which critics say has a poor legal and human rights record.

Read more: 'We are fighting against a dictatorship'

In the face of public pressure, Lam agreed to suspend the bill on Saturday. But the suspension failed to appease the protesters, who demanded she permanently shelve the controversial legislation.

Activist Wong, 22, has now joined protesters outside the Legislative Council, the city's legislature. In an interview with DW, he spoke about the increasing interference of China in Hong Kong's affairs and the future of the pro-democracy movement in the city.

DW: Why are you insisting on Carrie Lam's resignation?

Joshua Wong: Right now, two million Hong Kong citizens are calling on the chief executive to step down. We believe that she is ignoring our voice. We strongly oppose the extradition of our people to mainland China. Lam must bear the responsibility. She is not capable of leading Hong Kong. She does not represent the voice of the people; she only follows the orders of Beijing — like a puppet of the regime.

But the massive public demonstrations forced the government to suspend the extradition bill. Why aren't you satisfied? 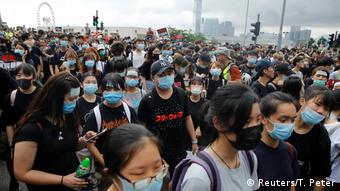 Nearly one-third of the city's citizens participated in the rally

Suspension of the law is not enough because we are not sure when the law will be activated again. We want the government to completely scrap it. At the same time, Lam's apology is not enough. She allowed the security forces to shoot at demonstrators. It's like what happened in Tiananmen Square in 1989. How can our government allow the police to shoot at her people? It's terrible.

How do you see the development of the movement in the future?

Even after 2 million people participated in the rally in Hong Kong for 17 hours, Lam stayed silent and disappeared. Not only Hong Kong's citizens and journalists, but even world leaders are also are asking, what's going on? Lam has already become a political burden for "Emperor Xi Jinping" before the start of the G20 summit, together with the chaos of the trade negotiations. She must pay the price and end her political career.

Are you confident that people's power can ultimately defeat Beijing's tightening grip on Hong Kong?

It's a long-term battle and we will not step back. We're waiting for the miracle and turning something impossible into the possible. We don't have any hope from the regime, but I have hope from the people. But when two million citizens or one-third of my people join hands, the government can't ignore it. We'll continue to protest and demonstrate. It is the only way for us. We'll continue to pile pressure on Hong Kong's leader.

What was your reaction when you learned about the massive rallies while in prison?

When I watched DW news in prison, I realized that the international community was keeping an eye on Hong Kong. It really impressed me how the people of Hong Kong showed to the world that they would not be silenced under President Xi Jinping's hardline rule. It is really impressive.

Do you regret missing the two major demonstrations [the education protests in 2012 and the Umbrella Movement in 2014]?

I not only regret missing the two huge rallies — but the jail sentence is also a burden I need to face. But I successfully overcame it. I thank the people for the love of Hong Kong, their hometown; they showed commitment. They can make something impossible, possible. We can win and get it done.