Upon release, he joined protesters calling for Hong Kong's leader to immediately resign. Joshua Wong has described a controversial extradition bill — the catalyst of mass protests — as an "evil law" he plans to fight.

Pro-democracy activist Joshua Wong was released from prison on Monday, a day after up to 2 million people protested against Hong Kong's embattled leader and her controversial extradition bill. He joined protesters outside the Legislative Council calling for Hong Kong leader Carrie Lam to resign.

In an interview with DW, Wong said: "Carrie Lam apologizing is useless because the damage has been done. Now is the time for Carrie Lam to step down, bare the political responsibility and withdraw any plans to prosecute activists."

The 22-year-old activist had been sentenced to two months in jail over his role in the 2014 "Umbrella Movement" protests against a Beijing initiative to screen candidates for the city's top executive.

Wong told DW that he would watch the German media outlet's coverage from his cell and it helped inspire him to know that the world was taking an interest.

"When I watched Deutsche Welle news inside prison I recognized how the international communities kept an eye on Hong Kong. I was really impressed."

Regarding the protests Wong said: "The government can't ignore it. We are waiting for the miracle and turning something from impossible to possible." 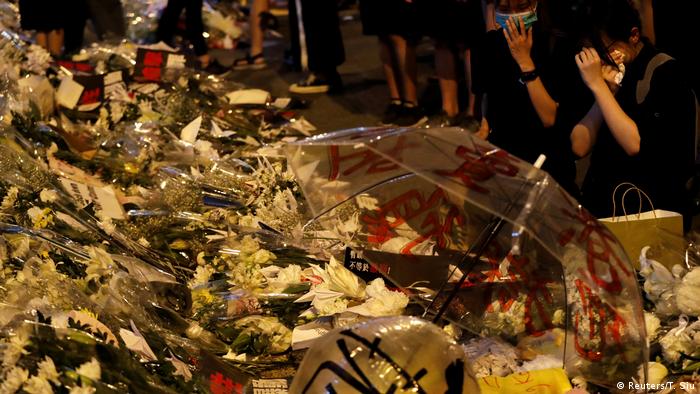 Flowers mark the place where a man died while protesting

Organizers say some two million people crowded Hong Kong's streets on Sunday to show their opposition to a bill that would allow residents to be extradited to mainland China. Police gave a lower estimate of 338,000 participants.

The extradition bill prompted outrage and triggered a series of massive rallies. In the face of public pressure, Lam agreed to suspend the bill on Saturday.

Freezing the procedure failed to appease the protesters, who demanded she permanently shelve the controversial initiative. They also called for her resignation and an apology for police violence against protesters.

Some protesters continued to occupy parts of a major road near Hong Kong's seat of government into Monday. Social workers and middle school students also planned further strikes for Monday.

Unlike previous rallies, security forces refrained from using force to clear the protesters. The police were also wearing their regular uniforms instead of riot gear.

Chinese state media largely ignored the Hong Kong rally on Sunday, and content related to it was removed from social media.

Beijing pledged to protect Hong Kong's rights and freedoms for 50 years when it took over the former British colony in 1997. However, Hong Kong residents fear that China's central government is already trying to hollow out the city's special status.

Read more: 'We are fighting against a dictatorship,' Hong Kong protesters tell DW