One man has been arrested after "very powerful" explosives were found at a storage unit used by a pro-independence group. Weeks of sometimes violent protests spurred a fresh rally calling on police to restore order. 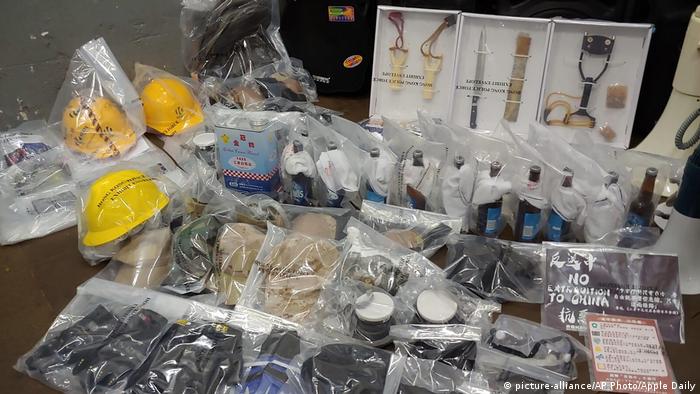 A bomb disposal team was deployed to an industrial unit in Hong Kong after the discovery of a homemade explosives laboratory, police said on Saturday.

Some 2 kilograms (4.4 pounds) of tri-acetone tri-peroxide (TATP) — the same high explosive used in the 2005 London transport bombings and the deadly Easter attacks in Sri Lanka — was seized in the district of Tsuen Wan late on Friday.

Pro-independence leaflets were also found during the raid, which took place just as the semi-autonomous Chinese territory geared up for another weekend of anti-government protests.

"This is an extremely sensitive and an extremely powerful high explosive. It will cause exceptional amounts of damage when used," Superintendent Alick McWhirter, a bomb squad specialist, told reporters.

The bomb disposal team carried out at least one controlled explosion and expected to do more because the TATP they had discovered was volatile, he added.

A 27-year-old member of the pro-independence Hong Kong National Front was arrested. The small fringe group released a statement on Facebook acknowledging the connection but added it had no knowledge of any explosives.

Hong Kong's leaders have struggled to respond to a massive wave of public anger over the past month after a plan backfired to change the law so that criminal suspects could be extradicted to mainland China for trial.

Concerned at China's lack of human rights provision, several weekends of anti-government, anti-Beijing rallies have at times seen more than a million people take to the streets.

The protests have sometimes turned violent, and in one incident on July 1, the 22nd anniversary of Hong Kong's handover from British to Chinese rule, demonstrators stormed and vandalized the Legislative Council.

Protest organizers have been buoyed by the public's response and are now demanding more autonomy from Beijing and have planned another anti-government march for Sunday.

Hong Kong was returned from Britain to China in 1997 with assurances that it would have a semi-autonomous status for 50 years under the "One Country, Two Systems" principle. The formula guarantees an independent judiciary and the right to protest.

But Hong Kong protesters say this autonomy is being eroded amid greater encroachment by Beijing authorities.

Government supporters out in force

Despite massive support for the protests, thousands of Hong Kong residents joined a pro-Beijing counterdemonstration next to the Legislative Council building on Saturday, denouncing the recent violence.

Some "Safeguard Hong Kong" demonstrators carried banners that read: "Support the police and protect the rule of law," and "Hong Kong is my home, I will protect it."

Organizers said their aim was to "restore order" and give the city's embattled leader Carrie Lam more time to recover from the territory's worst ever political crisis.