Taiwan pro-Beijing politician: ′You can change′ China | World | Breaking news and perspectives from around the globe | DW | 18.07.2019

"We should emphasize the differences" between China and Taiwan, says Taiwanese pro-Beijing politician Chou Hsi-wei. "Go there … and change them." But is he selling a fantasy to voters? He talks to DW's Conflict Zone.

Free press, free elections, free speech – all are present in Taiwan, but absent in mainland China, 180 kilometers away across the Taiwan Strait.

So what does the Kuomintang (KMT), the pro-Chinese opposition party who are against full independence for Taiwan, have to offer voters?

On Conflict Zone this week, host Tim Sebastian meets KMT politician Chou Hsi-wei, who was in the running when the interview was recorded to be his party's candidate for next year's presidential elections. He was defeated, however, by Han Kuo-yu, who has said full independence from mainland China was "more scary" than syphilis. 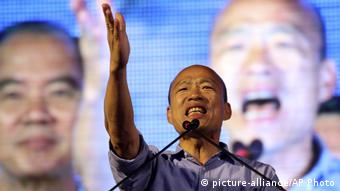 Han Kuo-yu, a pro-China mayor of the southern city of Kaohsiung, beat four other candidates to win the KMT party nomination and will face President Tsai Ing-wen in January 2020

'We can make China a peaceful country'

Sebastian began by asking Chou about his comments that tensions with China could only be resolved by talking and loving one another. How could he love a China that threatens Taiwan verbally and militarily?

"That's your impression," said Chou. "Actually, if you talk to some Chinese in mainland China, as long as you don't support separation from China, they'll not treat you like that, they'll not attack you."

Was this a normal way to live, Sebastian asked, to avoid saying the wrong thing or you're finished?

"I don't think it's that serious," answered Chou.

The U.S. State Department said recently that China had increased its pressure on Taiwan with "the largest increase in military activities" in 20 years, but Chou sidestepped accusations of bullying, saying, "We can do business with each other. We can ask China to make changes. We are the only people on earth believe that we can make that happen. We can make China a peaceful country."

In January this year, Chinese President Xi Jinping called for the peaceful reunification of China and Taiwan, which China sees as a breakaway region, but warned it would "make no promise to renounce the use of force and reserve the option of taking all necessary means."

China also strongly criticized the US government's recent approval of a $2.2 billion deal to sell arms to Taiwan, saying it threatened Sino-US relations as well as stability in the region.

"Nobody should underestimate the Chinese government's and people's firm determination to defend the country's sovereignty and territorial integrity," said a spokesman for China's foreign ministry.

'Be their friends, be their brothers'

Asked for evidence that China could be changed, Chou pointed to recent events in Hong Kong. "Why China is not using force to press down the demonstration? Why they compromise? Why? Because they seek opportunity to prove they can change."

Host Tim Sebastian went on to challenge Chuo's comment that he wanted a democracy in mainland China and to change it "by participation." Chuo denied that he didn't have a policy of standing up to Beijing and said he wanted to unify China under Taiwan's rules.

And if Beijing loses patience with Taiwan and is ready to invade, where would Chou's loyalties lie? Would he fight for Taiwan or not?

Taiwan's opposition Nationalist Party, also known as Kuomintang, has selected a pro-China leader after suffering a defeat at the polls in January. The new leader faces the challenge of regaining support for the party. (27.03.2016)