Beijing has urged protesters to renounce violence, saying it's having a "disheartening" effect on the economy. The mainland government said it "strongly supports" the Hong Kong government and its police force. 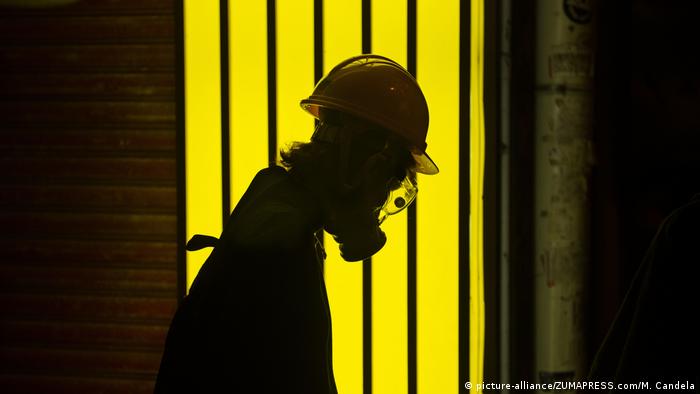 Chinese authorities on Monday said Beijing fully supports police in establishing the rule of law in Hong Kong after violent unrest over the weekend.

"Violence is violence, unlawful acts are unlawful. It doesn't change, no matter what the target," said Yang Guang, spokesman for the Hong Kong and Macau Affairs Office, considered the top mainland authority for the semi-autonomous city.

Yang blamed a few "radical protesters" for the violence. "The central government supports the relevant government departments and police to protect the rule of law," he said.

The comments are considered the first of their kind from an official Chinese government source. They also mark the first presser given by the office since 1997, when the UK formally handed over control of Hong Kong under a "one country, two systems" deal.

Hong Kong has been rocked by several weeks of civil unrest. What first started as protests against a controversial extradition law has blossomed into a movement calling for expanded democratic rights.

On Sunday, riot police fired tear gas and rubber bullets at protesters calling for Hong Kong leader Carrie Lam to resign. At least 49 people were arrested during the unauthorized demonstration.

The people of semiautonomous Hong Kong are right to be concerned about China's government. The FAZ journalist Peter Sturm explores the mainland's potential military threat to the territory in this guest commentary. (27.07.2019)