The Special Administrative Region is in turmoil. For weeks, activists have been protesting against a now withdrawn extradition bill. But the protests are really about Hong Kong’s future, says Alexander Görlach.

The protests of the past weeks are currently the only topic of discussion in Hong Kong. The extradition bill that the government of the autonomous region wanted to impose on its residents has driven more than 2 million out of a population of 7.5 million onto the streets and woken their rage at Beijing. This bill would have allowed anyone from Hong Kong to be extradited and brought before a court in mainland China, if the communist leadership so wished. That would have been the end of Hong Kong's independent status.

What distinguishes the semi-autonomous city-state of Hong Kong from mainland China is that it has a separate legal tradition and jurisdiction. This is presumably also what moved the masses onto the streets in recent weeks: The extradition bill was not merely an insignificant administrative act; rather,  Hong Kong's survival was at stake.

And this is likely also what led to the huge reaction of the international community. The US Congress is going to pass a "Hong Kong Human Rights and Democracy Act"; the European Parliament intends to do the same. It is not only economic interests that are prompting Western countries to give full support to Hong Kong. Rather, it has now become clear to everyone that the concept of "one country, two systems" has failed. 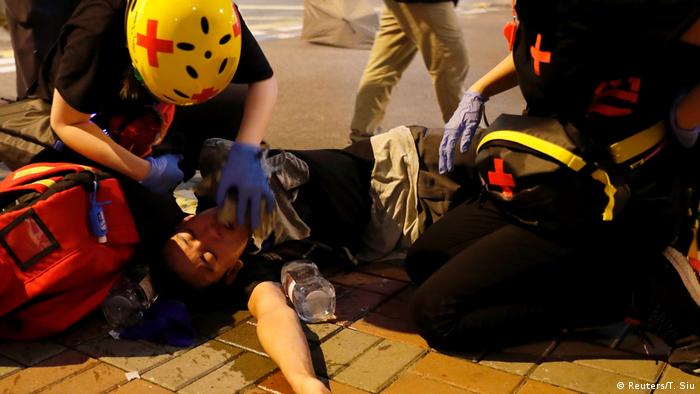 It was under this principle that Hong Kong was transferred from Great Britain to the People's Republic of China in 1997. Hong Kong was given a constitution, and Beijing provided assurances in a treaty that it would not interfere with the region's parliamentary and jurisdictional autonomy. The Communist Party never fully kept this promise. By 2014, this led to massive protests that became known as the "umbrella movement." At that time, students successfully fended off Beijing's bid to further appropriate Hong Kong.

Beijing is now anything but amused by the chaos that it sees as prevailing in the financial metropolis. Carrie Lam, Hong Kong's chief executive with Beijing's blessing, has declared that she prepared the extradition bill independently. There is no evidence that this is not the case. Nevertheless, it can be assumed that she at least was given the green light by Beijing and that she assured the Communist Party she had the situation under control. She may have relied on the fact that in the five years following the 2014 protests, the mood had cooled. This is where Carrie Lam miscalculated. For the moment, Beijing is holding back in terms of making public statements. Behind the scenes, however, things are far less calm.

Behind closed doors, a German delegation was strongly attacked and reprimanded for visiting Hong Kong. An "H" for Hong Kong seems to have been added to the "three Ts" — Taiwan, Tibet and Tiananmen — the three topics that must not be addressed under any circumstances in the People's Republic of China. This is extremely bizarre, because China has always prided itself on having Hong Kong as its gateway to the West. And since many mainland Chinese have invested money in Hong Kong and apartments there, the People's Republic still needs this tip on its southern flank. Carrie Lam said she came up with the extradition bill herself

A president under pressure

Mainland China, with its 1.2 billion inhabitants, could have simply kept its promise and left Hong Kong and its 7.5 million citizens in peace. Beijing's nervousness is a sign that President Xi Jinping is under pressure. At the beginning of his rule, he increased demands on Hong Kong and Taiwan and massively threatened both. He even threatened Taiwan with military intervention. The Taiwanese were able to see that "one country, two systems," which was offered to them as well, does not work. Taiwan had its own "Sunflower Movement," also in 2014, during the course of which a candidate from the Beijing-critical Democratic Progressive Party (DDP) was elected president for the first time. In other words, in places where people are able to take a critical look at Xi's leadership, it is not very popular. The West, meanwhile, has given up on China as a reliable contracting partner; the economy is faltering.

Meanwhile, the Hong Kong protests are continuing and are now about comprehensive reforms that go way beyond the rejection of the extradition bill. Beijing, for its part, cannot simply dismiss Carrie Lam, since it is unclear whether the Communist Party would again be able to easily push another candidate through the 1200-strong election committee due to the present situation in the city. The clock is ticking, as the current regulation assuring Hong Kong's autonomy expires in 2047. The democrats in the city must now begin to use their advantage and seize the moment to negotiate about the city's status after this watershed date. It certainly won't be easy.

Alexander Görlach is a senior research associate at the Institute on Religion and International Studies at the University of Cambridge as well as a senior fellow at the Carnegie Council for Ethics in International Affairs and honorary professor for ethics and theology at the University of Lüneburg. He has also held a number of scholarly and advisory positions at Harvard University. He holds PhDs in comparative religion and linguistics and is a guest columnist for several publications including The New York Times, Swiss daily Neue Zürcher Zeitung and business magazine Wirtschaftswoche.

US strikes in Syria kill top 'IS' leaders 7h ago

Germans using too much gas, could face emergency later authorities warn 10h ago