Hong Kong protests: Is the government losing control of law and order? | Asia| An in-depth look at news from across the continent | DW | 22.07.2019

Hong Kong protests: Is the government losing control of law and order?

After dozens of protesters were beaten by a mob at a train station, experts are warning that the escalating violence between opposing camps could become an ongoing threat to stability and the rule of law in Hong Kong. 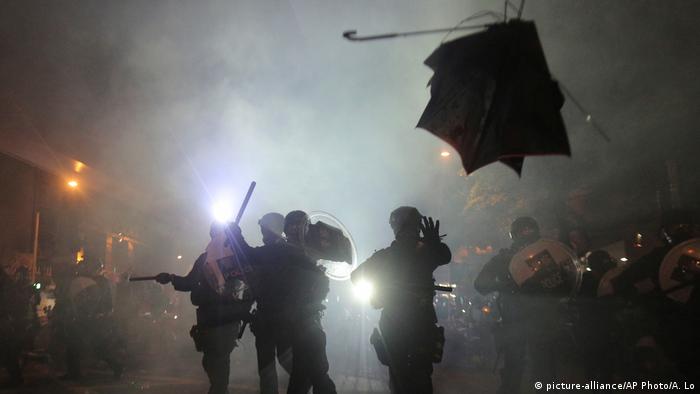 On Sunday night, dozens of Hong Kong pro-democracy protesters were hospitalized after they were indiscriminately attacked at the Yuen-Long metro station in the northwest part of the territory, a 45-minute ride away from the heart of the protests downtown.

The attack was an unprecedented act of violence against protesters, who over the past three months have taken to Hong Kong's streets in the millions in multiple protests against the city government and a controversial extradition bill.

On Monday afternoon, Hong Kong's chief executive, Carrie Lam, condemned the violence at a press conference, reiterating that violence is not a solution to the tension gripping the city.

"Violence will only breed more violence, and at the end of the day, the whole of Hong Kong and the people will suffer as a result of the loss of law and order in Hong Kong," she said.

While Lam promised to launch a police investigation into the attack, her government and Hong Kong police still came under fire for failing to respond quick enough.

Ivan Choy, a politics lecturer at the Chinese University of Hong Kong, told DW that the incident has caused many Hong Kongers to ask whether the city police are capable of maintaining public order and ensuring people's safety.

"A lot of people are questioning why the situation in Hong Kong is deteriorating so fast," Choy said. "Some even question whether the Hong Kong police have properly fulfilled their duties, or if they allowed last night's violent situation to escalate."

"I think many people are becoming more pessimistic about Hong Kong's future, and they don't think the current administration can effectively solve the ongoing crisis," Choy said.

A protester who was attacked at the Yuen-Long Metro Rail (MTR) station told DW that he was repeatedly hit by attackers while trying to protect a female journalist and a pregnant woman.

"A guy in pink shirt ran towards a female journalist and started assaulting her, and I had no choice but to try to save her," the man who gave his name as Cheng told DW.

"I got hit by something hard, but it didn't stop me. Then I ran to the ground floor and tried to ask for help, but there was no sign of any MTR staff."

For many people in Hong Kong, it is hard to the believe that such a violent incident could ever happen in the city.

Ma Ngok, an associate professor at the Chinese University of Hong Kong, told DW that incident at Yuen Long proves that the Hong Kong government can't guarantee the basic safety of average citizens.

"For many people who grew up in Hong Kong, they never imagined that they would need to worry about what color they wear in Hong Kong," Ma said. "This level of violence is totally inconceivable to many Hong Kongers."

Antony Dapiran, a Hong Kong-based writer and lawyer, said that last weekend's pro-police demonstration, and the attacks at Yuen Long, are a sign that Hong Kong is facing serious social divisions, and there is a real risk of more violence breaking out between opposing groups.

"I think we are coming into a dangerous time, because there is a real risk of serious citizen-on-citizen violence breaking out between different communities," Dapiran told DW.

"Under these circumstances, Hong Kong people don't have the confidence that they will be policed fairly and impartially, and that's the real threat to Hong Kong's rule of law."

However, Dapiran said he doesn't think the pro-democracy protesters will respond to violence with more violence, but said that these challenges will rather strengthen protesters' resolve to fight on.

"I don't see the willingness among anti-extradition bill protesters to escalate the violence," Dapiran said. "On the other hand, what happened in Yuen Long will push more protesters to come out and fight on." 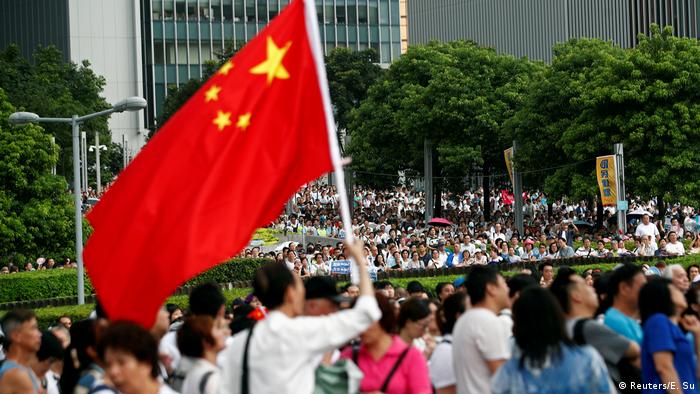 Will Beijing step in?

On Monday, Beijing's top official in Hong Kong slammed the defacement of the central government's liaison office, and said that the protesters' actions "offended all Chinese people."

"Those behaviors have not only violated Hong Kong Basic Law and local laws, but also seriously challenged the bottom line of the 'one country, two systems' principle and the authority of the central government," the liaison office said in a statement.

Ivan Choy points out that drawing graffiti on the liaison office wall and defacing the national emblem will likely trigger a strong response from the Chinese government.

"While I don't think Beijing has made up its mind regarding how to govern Hong Kong, the protesters' decision to deface the national emblem could push hardliners in Beijing to take over control of Beijing's Hong Kong policies," Choy told DW.

However, Dapiran said it's unlikely for Beijing to get overtly involved in Hong Kong's internal affairs, even though he thinks the central government has definitely been providing feedback to the Hong Kong government and police. "I think they will continue to be involved behind the scenes," Dapiran said.

Choy predicts that the anti-extradition bill movement is gradually splitting into two factions.

Following  the multiple violent clashes between protesters and police, Choy said that the level of turnout at large-scale protests is getting smaller, and he thinks this is a sign that more people are starting to worry about their personal safety as they consider joining a rally. However, he said that this doesn't mean the pro-democracy movement is losing steam.

"There are still hundreds of thousands of protesters who have insisted on continuing the movement and have become more confrontational," Choy said, adding that there are "two sides" to the protest.