Andy Chan, from the pro-independence Hong Kong National Party, has been disqualified from September's legislative polls. Beijing and Hong Kong officials say his views go against the city's Basic Law. 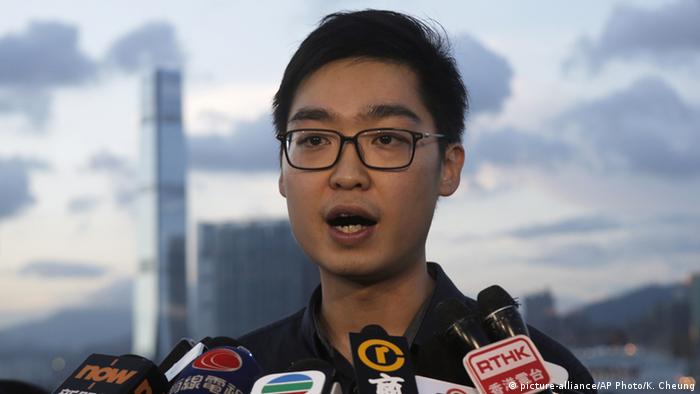 The party was informed that Chan's application to run for the New Territories West constituency had been "invalidated," the "South China Morning Post" reported.

"The National Party on July 30 received an email from the government saying they have officially disqualified the party's convenor Andy Chan," a statement said Saturday.

The party, which claims growing support for the semi-autonomous city to break away from mainland China, said it was "honored" to be the first to have a candidate disqualified.

"Even if they stop the party from taking part in the election, they cannot stop the inevitable process of Hong Kong becoming independent," the statement added.

Hong Kong student leader Joshua Wong has been convicted of participating in a protest that led to the city's mass pro-democracy rallies in September 2014. The 19-year-old has slammed his case as political persecution. (21.07.2016)

Is the Chinese central government eroding Hong Kong's autonomy? We ask artists there. (27.06.2016)

The assult of Ken Tsang by seven police officers in 2014 was caught on tape, sparking outrage in Hong Kong. Now he has been given a jail term for resisting arrest. (30.05.2016)

Chan was one of at least 13 pro-democracy candidates who refused to sign a declaration accepting that the city is an "inalienable" part of China, a measure introduced by the Commission earlier this year.

Critics have slammed the new proclamation as political censorship and an attempt to deter candidates from advocating self-determination or independence from Beijing.

But despite threats to challenge the move in court, Beijing and Hong Kong officials insist that advocating independence goes against the Basic Law - the territory's mini constitution.

On Saturday, a Hong Kong government statement reiterated that any candidate who promotes the independence of Hong Kong "cannot possibly uphold the Basic Law or fulfill his duties as a legislator."

Last week, a survey by the Chinese University of Hong Kong's journalism school showed just 17 percent of Hong Kong citizens support the idea of breaking away from China after 2047. Among 15- to 24-year-olds, support for independence was nearly 40 percent.

The date would mark the end of a 50-year "one country, two systems" agreement that China and the UK signed when the former British colony was returned to China in 1997. Beijing agreed that Hong Kong would be allowed greater freedoms than the rest of China until at least 2047.

Just 4 percent of respondents believed a breakaway was a real possibility, according to the survey of Cantonese speakers.

Over the past two decades, critics have accused China of failing to abide by its agreement, as Beijing increases its influence across a range of areas, from politics to the media.

Two years ago, the territory saw a three-month wave of pro-democracy demonstrations, which brought much of Hong Kong Island to a standstill. The so-called Umbrella Revolution, which peaked at more than 100,000 people, saw a series of sit-ins and street protests, which the Hong Kong and Beijing governments denounced as illegal.