The protests in Hong Kong are increasingly becoming a thorn in Beijing's side. How much longer will the Communist Party leadership sit back and watch? Don't count out China making a rash decision, says Alexander Görlach. 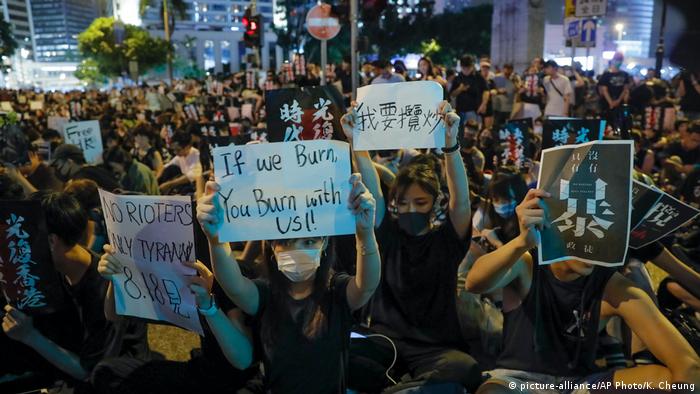 The conflict between Hong Kong and the People's Republic of China continues to escalate. On Monday, Facebook and Twitter announced they had deleted nearly a thousand Chinese accounts that were spreading false information about the Hong Kong protests. One of these accounts claimed that the protests were being directed by the West. But the state-run Chinese propaganda apparatus did not take into consideration that the social media giants had apparently learned from the US election disaster in 2016, when Russian bots propagated polarizing news in favor of Donald Trump.

The tanks are ready

Last weekend, hundreds of thousands of people took to Hong Kong's streets for the 10th week in a row to fight for the democracy they were promised by China in 1997 under the slogan "one country, two systems." The demonstrations have thus far been allowed to take place, but across the border in mainland China, the Communist Party leadership has now positioned its tanks. This is to signal to the people of Hong Kong that the protests, viewed by Beijing as riots, could soon come to an end. Experts are now arguing about whether China will use its weapons or not, and about what the country may have to gain or lose.

These assessments are made on the assumption of rationality, which may be a crucial error. From a rational point of view, it would be disastrous for Beijing to turn to military force again, 30 years after Chinese tanks flattened the demonstrations at Tiananmen Square. Nevertheless, as recently as January of this year, President Xi Jinping clearly threatened Taiwan with annexation under the same motto of "one country, two systems" if the country, considered independent by most of the rest of the world but seen as a renegade province by Beijing, continues to refuse to become part of China, or declares its independence.

At the Communist Party congress in autumn 2017, Xi stated that he would prevent any regions from seceding from China in any way. At the time, things were relatively quiet in Hong Kong; the 2014 mass protests were over. So what choice does Xi have now that he has already gone so far with his rhetoric? Unlike Taiwan, Hong Kong is geographically a part of China, even if the demonstrators chant "Hong Kong is not China." Nonetheless, Beijing should go to the trouble of talking to Hong Kong's citizens and addressing their demands.

Ultimately, "one country, two systems" was never understood the same way by Beijing as it was by the West. The West believed that the longer and more deeply China was involved with international institutions such as the World Trade Organization, the more it would modernize and democratize itself accordingly. Currently, it looks more like Xi can't wait until the 2047 deadline to have Hong Kong's special status come to an end. The sooner Hong Kong becomes like China, the better. Since taking office in 2012, Xi has consistently returned his country to the ideological state it was in before the detente that Deng Xiaoping initiated in the wake of the devastation brought by the Mao years and the Cultural Revolution.

The West is not to blame

This point of view makes it easier to understand why China's media are accusing the West of meddling in Hong Kong. Looking at things from the other side, however, it is clear that where there is a choice between democracy or communist dictatorship in China — in Taiwan and Hong Kong — people choose democracy. This should serve as motivation across the free world to keep strengthening democracy.

For the time being it cannot be ruled out that Beijing will choose to invade Hong Kong and extinguish the special rights that the island was meant to be granted until 2047, despite the economic damage China would suffer as a result. This would be "Tiananmen reloaded" — the return of the tanks that the world had to witness in June 1989.

Alexander Görlach is a senior research associate at the Institute on Religion and International Studies at the University of Cambridge as well as a senior fellow at the Carnegie Council for Ethics in International Affairs and honorary professor for ethics and theology at the University of Lüneburg. He has also held a number of scholarly and advisory positions at Harvard University. He holds PhDs in comparative religion and linguistics and is a guest columnist for several publications, including The New York Times, Swiss daily Neue Zürcher Zeitung and business magazine Wirtschaftswoche.

Serbia cancels plan for lithium mine following protests 1h ago