The exercises are likely meant to send a message from Beijing to pro-democracy protesters in Hong Kong, although analysts believe the Chinese government is unlikely to send in forces to intervene in the demonstrations. 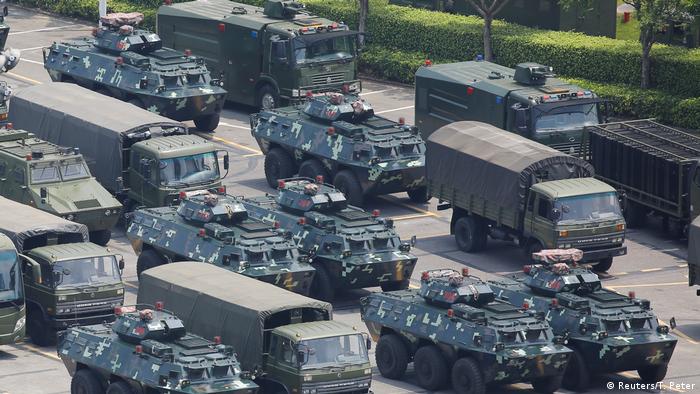 Hundreds of members of members of China's People's Armed Police (PAP) were seen marching and conducting exercises in the city of Shenzhen near the Hong Kong border on Thursday, according to journalists on the scene.

Over 100 paramilitary vehicles, including armored personnel carriers and troop trucks, were seen parked at a stadium in Shenzhen, with troops marching in fatigues. At least two of the vehicles were carrying water cannons, according to a Reuters reporter.

The exercises come after ten weeks of pro-democracy demonstrations in semi-autonomous Hong Kong, including increasingly-violent confrontations between police and protesters. A sit-in by protesters at the Hong Kong International Airport prompted two days of flight cancellations.

In recent days, Chinese state media have posted videos of the PAP assembling in Shenzhen, while US President Donald Trump tweeted that US intelligence confirmed Chinese troop movements at the border.

China's ambassador to the UK issued a warning to protesters on Thursday, saying Beijing will not "sit on its hands and watch" if the situation continues to deteriorate.

"We have enough solutions and enough power within the limits of [the] Basic Law to quell any unrest swiftly," Ambassador  Liu Xiaoming said. "Their moves are severe and violent offences, and already show signs of terrorism."

'Trucks aren't about to roll at this point'

Concerns have been rising about Beijing possibly intervening to put an end to the demonstrations, although diplomats and analysts believe Beijing has little desire to use the PAP or People's Liberation Army troops to halt the pro-democracy protests.

"We can be certain the regime understands that sending in troops to Hong Kong will inflame the protests and the protesters' anti-China grievances," James Char, a military expert at Singapore's Nanyang Technological University, told news agency AFP.

China has been ramping up its posturing in order to send a message to protesters in Hong Kong, a senior Western diplomat in Hong Kong told Reuters news agency, but the exercises "are still in the realms of propaganda."

"The trucks aren't about to roll at this point," the envoy said, speaking on condition of anonymity.

The Chinese government has repeatedly referred to the demonstrations as "near terrorism" and described the protests as rioting, with legal experts saying Beijing might use anti-terror laws to quell the demonstrations.

The ongoing demonstrations in Hong Kong have plunged the city into its worst crisis since it reverted from British to Chinese rule in 1997.

The protests began in opposition to a bill that would allow the territory to extradite people facing criminal charges to mainland China, but the movement has expanded to include wider calls for democracy.

China arrests Hong Kong student near US consulate 36m ago