Many pro-democracy activists fled China after the Tiananmen massacre, but they continue to support dissidents from abroad. With Beijing intensifying its crackdown on civil society, the movement faces new challenges. 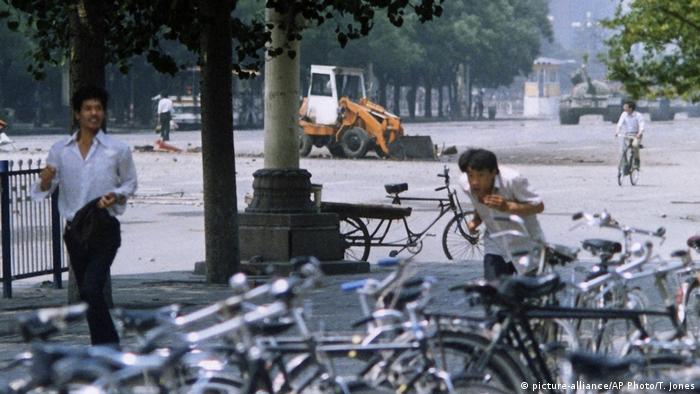 It's been 30 years since the Chinese government launched a brutal crackdown on pro-democracy protesters at Beijing's Tiananmen Square. Student activists that participated in the demonstrations vividly recall the belligerent night.

Zhou Fengsuo, one of the Tiananmen activists, described the June 4, 1989 Beijing as "a battlefield."

"We were surrounded by security forces, and we could hear gunshots all around us. But Beijing's citizens put up a brave resistance, and that is why student protesters were able to retreat peacefully from Tiananmen Square," Zhou said.

Following the bloody massacre on June 4, 1989, the Chinese government launched an operation against student activists and teachers who supported the pro-democracy movement, forcing them to flee the country and seek refuge abroad. Some fled to the US and France, while those who stayed back were incarcerated by Chinese authorities. The government released them after several years due to pressure from the international community.

Those who left China continued their struggle against authoritarianism from abroad and established several organizations to influence Chinese civil society. Some of these groups had been formed by Chinese expats even prior to the Tiananmen massacre, Zhou told DW. "They played an important role in laying the ideological foundation for Tiananmen protests."

The Stars Group was one such organization. Founded by young Chinese artists in 1978, the group was dissolved in 1983 after its requests to organize exhibitions were repeatedly rejected by the Communist Party of China. But in January 1989, its members organized their 10th anniversary exhibition in Hong Kong, showcasing a play about a prominent political prisoner.

Humanitarian China is another organization dedicated to supporting Chinese dissidents and their families in China. Founded in 2007, the group focuses on providing financial support to activists and their family members. Some of these include relatives of the exiled June 4 demonstrators.

Wang Dan, one of the Tiananmen protesters and founder of Dialogue China, a Washington-based think tank, told DW that over the years the overseas pro-democracy movement has documented China's human rights violations and shared it with the international community.

"Since most of the Tiananmen student activists don't live in China anymore, they can't really be the leaders of the pro-democracy movement in the country. They have to lend support to local movements instead," Wang said.

In the past decade, the rise of China as a global superpower has allowed Beijing to increasingly suppress pro-democracy movements.

"In the past 30 years, the US has reached out to China with some mutually beneficial economic initiatives to increase bilateral interaction. This has negatively affected China's local and overseas democratic groups," Zhou said.

"At the same time many June 4 activists became richer due to China's economic growth," Zhou pointed out. "Chinese expats, for instance, no longer want to anger the ruling Communist Party, so they became reluctant to fund overseas pro-democracy groups, which has limited our potential to expand," he added.

Feng Congde, one of the Tiananmen leaders, questioned the effectiveness of overseas pro-democracy organizations.

"Some so-called Tiananmen 'stars' were partially created by media. When only some individuals get the spotlight, it becomes harder for any movement to survive," Feng told DW. "Also, a lack of resources drove people away from the movement," the activist added.

At the same time, Beijing's intensifying crackdown on civil society groups and domestic censorship has made it more difficult for overseas groups to link up with dissenters in China.

"Overseas movements have been trying to encourage dissidents in China to establish their own organizations, but Chinese authorities are forcing civil society groups to cease their operations. The Chinese government has been quite successful in breaking our connection to many Chinese dissidents," said activist Zhou.

With China's rapid economic expansion in recent years, experts believe that the overseas pro-democracy movement faces tougher days ahead. Shao Jiang, a Tiananmen student activist who is now a visiting fellow at University of Westminster's Center for the Study of Democracy, told DW that in order to stay relevant, China's pro-democracy activists need to align themselves with global campaigns against China's totalitarian expansion.

"Since pro-democracy activists have limited influence over Western leaders, they need to merge their movement into the global alliances against China's aggressive expansion," Shao argued.

Activist Zhou believes that 30 years since the Tiananmen massacre, Chinese pro-democracy activists and groups need to come up with some new ideas and plans, adding that not fighting for democracy in China is not an option.

"Even though many people have lost hope in China's pro-democracy movement, I think we need to believe that history will be on our side," he underlined.

Read more: What do the Hong Kong and Tiananmen protests have in common?

Opinion: Why we remember Tiananmen Square

Thirty years have gone by since the world watched the Tiananmen Square massacre in China. So why must we remember the events of June 4? It's a deceptively simple question, says academic Perry Link. (03.06.2019)

Hong Kong's pro-democracy advocates are divided over whether to fight for democracy in China, or focus on Hong Kong. Activists seeking greater freedom from Beijing in 2014 were rebuffed by the regime. (04.06.2016)

A prominent Tiananmen Square exile has entered the race for a seat in Taiwan's parliament as an independent. Wu'er Kaixi says he will take a tough line on Taiwan's relations with mainland China. (24.07.2015)

A tearful Chow Hang-tung told the court that discussion about 1989 protests could disappear completely from Hong Kong in the future. Several others are also serving jail time for participating in the 2020 vigil.

Hundreds of students in Beijing have called for freedom of movement amid concerns over tightening COVID restrictions on campuses. Videos circulated online showing students tearing down a metal wall.

A slogan painted across a bridge to remember the victims of the 1989 Tiananmen Square massacre has been boarded up. The decision is the latest in an effort to censor a topic considered taboo on the mainland.