Tiananmen anniversary — keeping the memory of the massacre alive | Asia | An in-depth look at news from across the continent | DW | 04.06.2018

Tiananmen anniversary — keeping the memory of the massacre alive 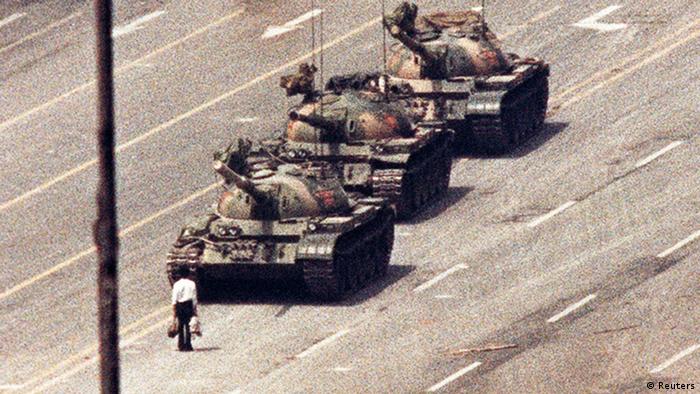 DW: It's been 29 years since Chinese authorities brutally cracked down on student-led protests in Beijing's Tiananmen Square. What is your most unforgettable moment from the events on June 4, 1989?

Wu Renhua: The most unforgettable moment was my own personal experience of the crackdown on June 4, 1989; the memory of the massacre on Tiananmen Square from the evening of June 3 to the early hours of June 4, when I followed students evacuating the square at around 6 a.m.

When we were passing by West Changan Street, there were three tanks chasing us. Eleven students were killed and many injured.

How did you manage to collect information regarding the officials and soldiers involved in the crackdown?

I searched for information on about 300,000 to 400,000 People's Liberation Army (PLA) soldiers. After countless hours of examination and research, I was able to identify and name 3,000 PLA soldiers who participated in the June 4 clampdown. Some 250,000 soldiers were mobilized by the authorities at that time. Over the past 29 years, only a few people have come forward and publicized their experiences.

Three of them told their stories from the point of view of repentance and opposition to armed repression. Two other officers didn't express their stance on the incident, but simply narrated what they had experienced. It is very sad that only these five people have so far come forward.

How did these soldiers react to the orders given to them at the time?

The information provided by him is very valuable. He mentioned that Xu Feng, commander of the 116th Division (39th Group Army), did not abide by the orders given to him to participate in the Tiananmen crackdown. He was finally "handled" by the military force.

I have looked for information on Xu Feng, but I only know that he was expelled from the army. Another army officer, Zhang Shichun, was demoted and a year later he passed away due to depression.

The Tiananmen Mothers, a group of Chinese democracy activists, have been collecting the names of victims for years. Due to the Chinese government's strict controls and crackdown, this work has been very difficult. Still, they have managed to provide a list of the victims of the June 4 massacre, which now stands at 202. This is only a small fraction of the number of those who died that year.

I believe the victims should also include the injured, like Fang Zheng of the Beijing Institute of Physical Education, who lost both his legs as a result of the violence.

In addition, the list of victims should include those who suffered under the nationwide manhunt and trial afterwards.

According to the internal data of China's Ministry of Public Security, as of June 25, 1989, Chinese authorities arrested 11,013 people across the country, except the Tibet Autonomous Region and Shaanxi Province. The government continued to arrest people even after June 25. These people should also be counted as victims.

It's a lot of work and it's very difficult. But I think it has to be done because it's not a simple historical record. The Tiananmen massacre is a catastrophic human rights violation. If there is no basic information about the victims and the perpetrators, it is totally inadequate.

What is the toughest part in carrying out your research?

After 29 years, this work is becoming more and more difficult. But if it is not done now, it is likely that there won't be any historical record left about the perpetrators and the victims at all. Just like what happened to the Cultural Revolution, the anti-rightist movement, the land reform movement and the suppression of counter-revolutionary movements.

The Chinese government has always regarded June 4 as the biggest forbidden zone, imposing more censorship and control over it than the historical events I mentioned above. Therefore, the information is rather deficient. I have spent much time collecting data, which is still not complete.

Why do you think this work is so important?

The Chinese government has been using the media to control the news and public opinion, saying that there were counter-revolutionary riots in Beijing and that martial law had to be imposed to ensure law and order. They use the press and videos to distort facts and causality of the army firing. So it is important to restore the truth and leave a record of history.

I have been doing research and collecting data on the Tiananmen incident for a long time and this has been a very painful experience for me, especially given that I personally experienced the massacre.

I came to Taiwan this time, partly to gather some additional information and interact with my colleagues in Taiwan. But it's also about healing. I will then start to write again.

What can we expect from Hong Kong and Taiwan when it comes to the Tiananmen incident?

We shouldn't have too many expectations. Of course, Hong Kong's reaction to the June 4 incident has always been quite strong, with the annual anniversary parade and the candlelight party at Victoria Park becoming iconic events.

I find these activities valuable and meaningful, but commemorating the June 4 incident will not do much to rehabilitate the event. Even the word "rehabilitation" is now very controversial.

Neither Hong Kong nor Taiwan could "reevaluate" the event, and the Chinese Communist Party (CCP) does not want to do it. It could only be possible when there is a change in society, a new political opposition movement in mainland China. It can only come from the civil society, not from the CCP. Only when there is real political change in Chinese society, such as a democratic transition, will the June 4 event be justly evaluated.

Do you see that happening in the foreseeable future?

I can only say that it will eventually happen, regardless of whether it takes 3, 5, 10 or 20 years. I once tweeted a joke, Mao Zedong's only contribution is to prove with his own death that Chairman Mao's "Long Live" is a lie. "The Communist Party will always be ruling” is a lie, too. It is impossible. I cannot predict when the change will come, but it will.

Wu Renhua is a Chinese scholar and participant in the 1989 Tiananmen Square protests in Beijing.

The interview was conducted by Kong Wing Yi.

Taiwan's president has offered to help China shift into democracy on the 28th anniversary of Beijing's crackdown on pro-democracy demonstrators in Tiananmen Square. Thousands also gathered in Hong Kong for a vigil. (04.06.2017)

Pro-democracy candidates in Hong Kong have won back only two of the four seats up for grabs in a crucial by-election. The result means the democrats will lose veto power over some bills in the city's legislature. (12.03.2018)

China has executed eight people for "terrorist attacks," media reports say. Among those killed were three men accused of having masterminded a suicide car crash in Beijing's Tianamen Square in 2013. (24.08.2014)