Opinion: Why we remember Tiananmen Square

Thirty years have gone by since the world watched the Tiananmen Square massacre in China. So why must we remember the events of June 4? It's a deceptively simple question, says academic Perry Link. 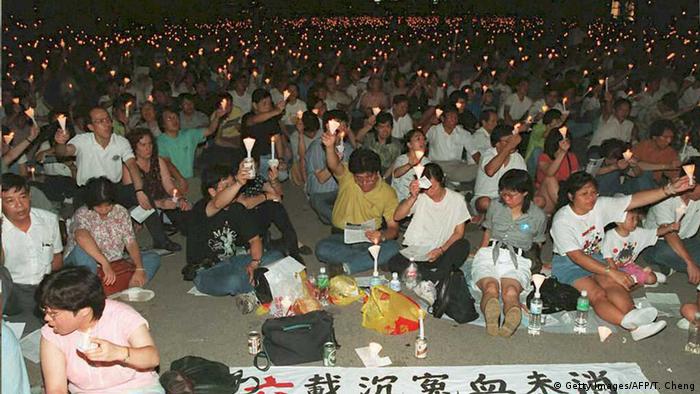 We remember June 4 because Jiang Jielian, a student protester who was killed by the military on that day in 1989, was 17 at the time. He is still 17. He will always be 17. People who die do not age.

We remember June 4 because the lost souls that haunted human rights activist and Nobel Peace Prize laureate Liu Xiaobo until he died will haunt us, too, until we do.

We remember June 4 because the glint of bonfires on bayonets is something one does not forget, even if one did not see it personally.

We remember June 4 because it taught us the essential nature of the Communist Party of China when all of the clothes, every shred, falls away. No book, film, or museum could be clearer.

We remember June 4 because it was a massacre — not just a crackdown, or an "incident," an event, a shijian, a fengbo; not a counterrevolutionary riot, not a faint memory. It was a massacre.

We remember June 4 because, as the late scientist and dissident Fang Lizhi noted with his characteristic wit, it is the only case he has heard of in which a nation invaded itself.

We remember June 4 because we want to know what the soldiers who did the killing remember. They were brainwashed on the outskirts of the city before they carried out their deadly orders. So they were victims, too. We do not know what their thoughts were, but we remember that we want to know.

We remember June 4 because Ding Zilin, the mother of Jiang Jielian, is still alive. She is 82 years old. When she goes out, plainclothes police follow to provide security. Security for her? No, security for the state. That's right, a regime with 100 trillion yuan ($144.6 billion, €130 billion) in GDP and 2 million soldiers needs protection from an 82-year-old lady. Protection from her ideas. This is worth remembering.

We remember June 4 in order to support others who remember. We remember alone. But we remember together, too.

We remember June 4 because it was a historic turning point for one-fifth of the world. A turning point in a frightening direction. We hope it won't be so much of a turning point as to throw the whole world into a ditch. But we don't know. We'll have to see.

We remember June 4 because, if we didn't remember it, it could not be in our heads any other way. Could we possibly have imagined it? No.

We remember June 4 because there are people who dearly want us to remember. It comforts them to know that we remember.

We remember June 4 because there are also people who desperately want us not to remember. They want us to forget because forgetting helps to preserve their political power. How foul! We would oppose that power even if remembering massacres were the only way to do it.

We remember June 4 in order to remind ourselves of the way the Chinese government lies to itself and to others. It says the Chinese people have long since made their "correct judgment on the 1989 counterrevolutionary riot at Tiananmen Square." But each year, on June 4, plainclothes police block people from entering the Square. Why? If the Chinese people all believe what the government says they believe, then why not let the people into the square to denounce the counterrevolutionaries? The presence of the police shows that the regime does not believe its own lies.

We remember June 4 because shocks to the human brain last a long time. We would not be able to forget even if we tried.

Perry Link is Chancellorial Chair Professor for Innovative Teaching, Comparative Literature and Foreign Languages in the College of Humanities, Arts, and Social Sciences at the University of California, Riverside and Emeritus Professor of East Asian Studies at Princeton University. Link has translated many Chinese stories, writings and poems into English. Along with Andrew J. Nathan, he translated The Tiananmen Papers, which detailed the governmental response to the 1989 democracy protests.

Many pro-democracy activists fled China after the Tiananmen massacre, but they continue to support dissidents from abroad. With Beijing intensifying its crackdown on civil society, the movement faces new challenges. (03.06.2019)

US: Fed likely to raise rates in March amid soaring inflation 1h ago