The opening day of China’s National People's Congress focused on a controversial security law for Hong Kong that would likely ban treason, subversion and sedition. The Hong Kong stock market plunged more than 5%. 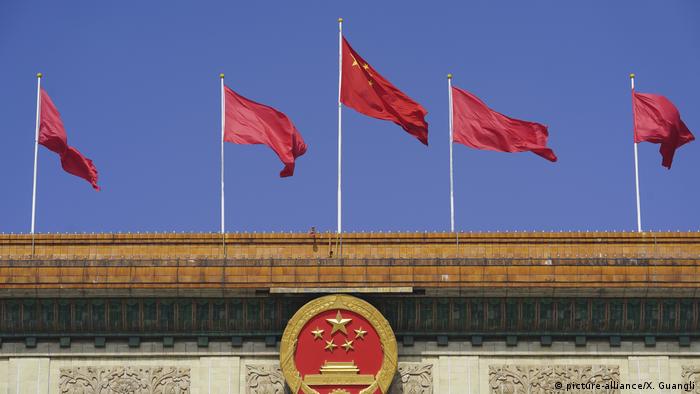 China submitted a proposal to enact new Hong Kong security legislation during the opening day of the National People's Congress on Friday.

The proposed "enforcement mechanisms," which are expected to ban treason, subversion and sedition, have faced significant backlash from the US, Taiwan and pro-democracy figures in Hong Kong.

Beijing tried to introduce a similar law in 2003 but shelved the initiative due to mass protests.

On internet threads and chat apps used by Hong Kong's pro-democracy movement, there were calls to resume the protests of last year that were largely subdued in recent months because of coronavirus restrictions.

"Beijing is attempting to silence Hongkongers' critical voices with force and fear," Wong said on Twitter, while expressing defiance.

The move also hit financial markets, due to concerns the city's status as a global financial hub was at risk, with Hong Kong stocks selling off by as much as 4% at lunchtime on Friday.

China National People's Congress, the weeklong session for delegates from across the country, opened nearly two months late due to the coronavirus pandemic.

Friday's session began with 2,897 delegates observing a moment of silence for the victims of the coronavirus outbreak. China has reported over 80,000 confirmed cases of the virus. Over 4,500 people have died.

During his address at the Congress’ opening ceremony, Premier Li warned that the battle against the virus was not over as he called on the country to "redouble our efforts" to revive China’s struggling economy.

In the face of "great uncertainty", Li said that China would be laying emphasis on higher spending to revive the battered economy instead of setting a GDP growth target, a rare move for one of the largest economies in the world.

Instead, Li said that Beijing will "give priority to stabilizing employment and ensuring living standards."

The premier announced that Beijing will issue 3.75 trillion yuan ($526 billion) in special government bonds to boost infrastructure spending in the virus-hit economy. This indicates an increase of close to 1.6-trillion-yuan over last year.

The country’s defense spending will rise by 6.6% under the new budget report. This is lower than the 7.5% increase that came in 2019.

The Chinese economy shrank 6.8% in the first quarter of 2020 for the first time in close to four decades. The country has been rattled by a coronavirus outbreak, which first emerged in the central city of Wuhan late last year.

While thousands of Chinese lawmakers gather for their annual session, Beijing is preparing a new law against subversive activities in Hong Kong. Opposition democrats in the city warn it would be "the end of Hong Kong." (21.05.2020)