Taiwanese President Tsai Ing-wen won reelection in a landslide using a staunchly pro-independence platform. In response, Beijing has stepped up its rhetoric and military activity. 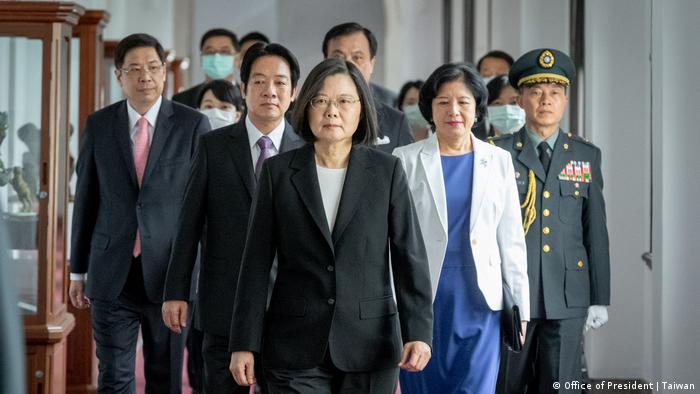 As Taiwan’s President Tsai Ing-wen was sworn in for her second term on Wednesday, Beijing used the opportunity to make veiled threats against its island neighbor, which it considers to be Chinese territory.

"Reunification is a historical inevitability of the great rejuvenation of the Chinese nation," China’s Taiwan Affairs office said in a statement. "We have the firm will, full confidence, and sufficient ability to defend national sovereignty and territorial integrity."

China would "not leave any space for Taiwan independence separatist activities," the statement said.

The statement was likely a response to Tsai’s inaugural address, in which she asserted that Taiwan would never accept being ruled by Beijing, even under the so-called "one country, two systems" policy it employs to give Hong Kong a modicum of autonomy.

"Both sides have a duty to find a way to coexist over the long term and prevent the intensification of antagonism and differences," she said, saying she was open to dialogue with the mainland provided they meet as equals.

Tsai and her Democratic Progressive Party won a landslide victory during elections in January after she ran on a platform of standing up to China.

Separated from the mainland by a narrow strait, Taiwan has asserted its sole legitimacy as the government of China ever since the Communist Party came to power in Beijing in the 1940s, and officially calls itself the Republic of China. Beijing sees it as a breakaway territory with no right to act as a separate nation, and has cut off formal diplomatic channels with the island since Tsai was first elected in 2016.

Recently, as Tsai and her party have taken a hardline stance against the ambitions of Chinese President Xi Jinping, the mainland has been more aggressive about its belief that Taiwan must be brought under its control — by force if necessary. To that end, China has stepped up military exercises near the island’s coast in the Strait of Taiwan.

Rare open message of support from US

While successive US governments have tacitly supported Taiwan in opposition to Beijing without recognizing it as an independent state, the administration of President Donald Trump has been more forthcoming in backing Tsai.

Secretary of State Mike Pompeo sent his congratulations to Tsai on Tuesday night, praising her "courage and vision in leading Taiwan's vibrant democracy", in a rare high-level message from directly from Washington to the Taiwanese government.

Foreign Minister Joseph Wu attributed the decision to the limited time that World Health Assembly participants will have to deliberate the global response to the coronavirus pandemic. (18.05.2020)

Police say they have arrested 230 people, some as young as 12, after a weekend of pro-democracy demonstrations. Activists are concerned that pandemic lockdown measures will be used by China to roll back more rights. (11.05.2020)