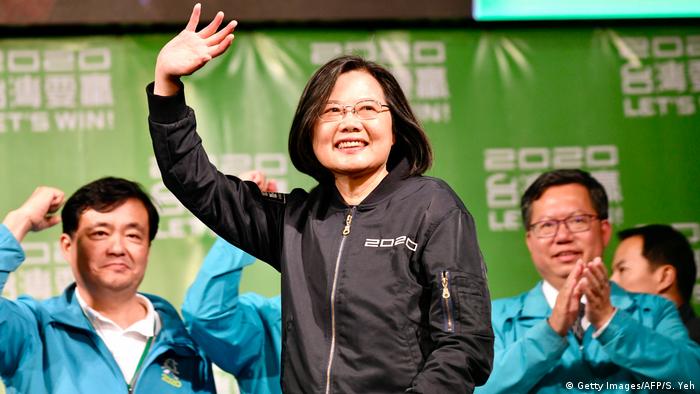 Tsai announced her triumph as thousands of supporters cheered and waved flags outside her party headquarters.

Her main opponent, Han Kuo-yu of the Beijing-friendly Kuomintang (KMT) party, had conceded defeat just before she made her declaration.

Official results showed Tsai had romped to victory with 57.2%, totaling more than eight million votes. Han trailed behind with 38.6% and five and a half million ballots cast in his favor.
Read more: Can Taiwan counter China's 'diplomatic aggression'?

Tsai, 63, positioned herself as protector of democracy and sovereignty on the self-governing island, where 19 million people are registered to vote.

Han, a 62-year-old populist mayor of the port city of Kaohsiung, ran on a platform of improving the Taiwanese economy by building a better relationship with the mainland.

Taiwan has had de facto independence from China since 1949, but Beijing considers it part of its own territory and has vowed to retake the island, even by force if it deems necessary. Beijing has increased pressure for unification since Tsai took power in 2016.

Chinese President Xi Xinping has said that the "one country, two systems" approach used in its relations with Hong Kong is also the best approach for Taiwan.

But China's response to pro-democracy protests in nearby Hong Kong has only increased anti-China sentiment in Taiwan and has given Tsai a significant boost in support.

Eager to see Tsai go, China has provided campaign funds and mobilized support on social media for the KMT candidate.

Just days before the election, Taiwan passed legislation designed to limit Chinese meddling in the election.

The DPP had held a parliamentary majority for the first time, prior to Saturday's vote.

US Secretary of State Mike Pompeo was effusive in his praise of Tsai Ing-wen upon winning a second, and final, term while warding off the interests of China.

"We congratulate Taiwan for once again demonstrating the strength of its robust democratic system, which - coupled with a free market economy and a vibrant civil society - makes it a model for the Indo-Pacific region and a force for good in the world," Pompeo said in a statement.

"The American people and the people on Taiwan are not just partners, we are members of the same community of democracies, bonded by our shared political, economic, and international values," he said.

He added that Washington approves of Tsai's commitment to maintaining stability in Tawian's relations with China "in the face of unrelenting pressure."