Taiwan's president has rejected a Chinese offer of a Hong Kong like model for unity with China. She said democracy and authoritarianism cannot co-exist in the same country. 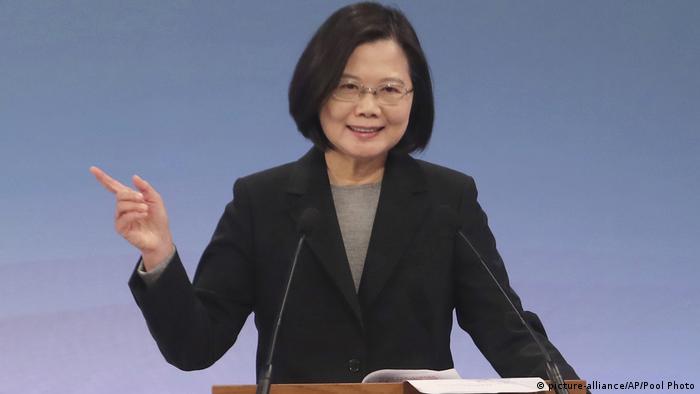 The Hong Kong model of "one country, two systems," would not work for Taiwan, President Tsai Ing-wen said on Wednesday.

China had proffered the political formula as a way towards unity between the two countries. However, Tsai said the arrangement had failed in Hong Kong and would not work in democratic Taiwan.

Tsai vowed to defend the island nation's sovereignty during her New Year's speech ahead of a January 11 re-election bid. She promised to develop safeguards against increasing Chinese pressure.

"Hong Kong people showed us that 'one country, two systems' is definitely not feasible," Tsai said.

China claims Taiwan as part of its territory and has threatened the use of force to bring the country back under its control. The Taiwanese parliament passed an anti-infiltration law on Tuesday, aimed at combating Chinese influence.

Fear of China has formed a vital part of Tsai's election campaign as she attempts to win a second term.

"China's goal is very clear and that is to compel Taiwan to make concessions on the question of sovereignty under duress,'' Tsai said.

She said under her leadership, Taiwan would focus on how China is causing instability in the Taiwan Strait, and that Taiwan would not exchange sovereignty for short-term economic gains.

In his New Year's Eve address, Chinese President Xi Jinping avoided repeating his previous references to a military option, but he reiterated China's opposition to independence for Taiwan.