Taiwan's president Tsai ing-wen promised to provide the people of Hong Kong with the "necessary assistance" as tension in the city rises over China's new national security law. 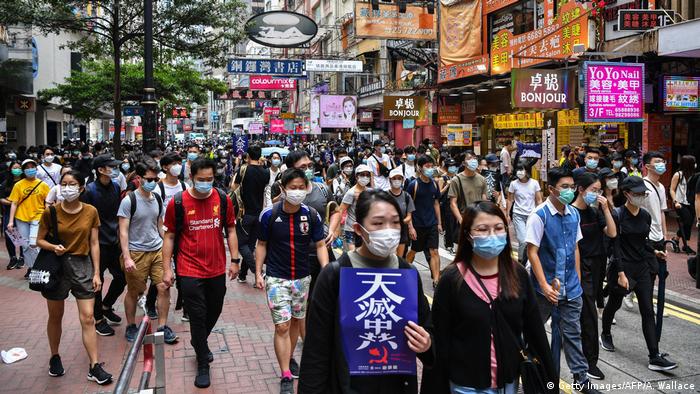 Taiwanese President Tsai Ing-wen said her government will provide the people of Hong Kong with "necessary assistance" amid protests in the semi-autonomous city over China's proposal to enact security legislation.

Tsai said the proposed national security law for Hong Kong was a serious threat to the city's freedom and judicial independence. She also criticized the authorities for their heavy-handed approach in dealing with the protests.

"The solution is not bullets, not to create more fear and crackdown, but to truly implement freedom and democracy and truly live up to Hong Kong's promise of autonomy," Tsai said in a Facebook post late Sunday.

"In the face of changes in the situation, the international community is actively helping the people of Hong Kong," the president wrote, referring to a rebuke from foreign governments, including US senators and British lawmakers.

Taiwan, she said, will "even more proactively perfect and forge ahead with relevant support work and provide Hong Kong's people with necessary assistance."

The leader of Taiwan's main opposition party, however, accused Tsai's government of failing to take meaningful action. "Don't let 'supporting HongKong' only be a slogan of empty promises ... Bring up your thoughts on legislation. Support Hong Kong with real actions," said Johnny Chiang of the pro-Beijing party, the Kuomintang.

Thousands of people in Hong Kong took the streets on Sunday to oppose Beijing's proposed law after calls by pro-democracy activists to resume the protests of last year, which were disrupted due to the coronavirus pandemic.

The city police fired tear gas to disperse black-clad protesters who were seen chanting pro-democracy slogans such as "Liberate Hong Kong,'' "Stand with Hong Kong" and "Revolution of our times."

Beijing unveiled a proposal last week to strengthen the "enforcement mechanism" in the semi-autonomous territory. The national security law for Hong Kong would ban sedition, secession, and subversion against China.

The legislation comes after Hong Kong endured seven months of massive pro-democracy protests last year during which the Chinese leadership issued repeated warnings that it would not tolerate dissent in the city.

However, critics warn that the law would go against the "one country, two systems" political framework and threaten civil rights in Hong Kong.

Many pro-democracy figures fleeing Hong Kong have sought refuge in Taiwan, and the number of asylum seekers has been increasing as the security situation in the city deteriorates.

Taiwan's laws promise to help Hong Kong citizens whose safety and liberty are threatened due to political reasons.

As a result, the island has become a base for anti-Beijing resistance.

China, however, considers Taiwan as its renegade province that will one day be reunified with the mainland, by force if it deems necessary. It also believes Taiwanese leader Tsai Ing-wen to be a "separatist."

Tsai began her second term in office last week after her Democratic Progressive Party won a landslide victory in the presidential polls in January. At her inaugural address, she asserted Taiwan's independence and said the island would never be ruled by Beijing, even under the 'one country, two systems' framework.

Taiwan, separated from China by a narrow strait, has asserted its sole legitimacy as the government of China since 1949 when the Communist Party took power in Beijing. It officially calls itself the Republic of China.