Police have fired tear gas and deployed water cannon and armored trucks as thousands of demonstrators turned out to reject Beijing's latest plan. The protests are the biggest flare-up since Hong Kong's COVID-19 lockdown. 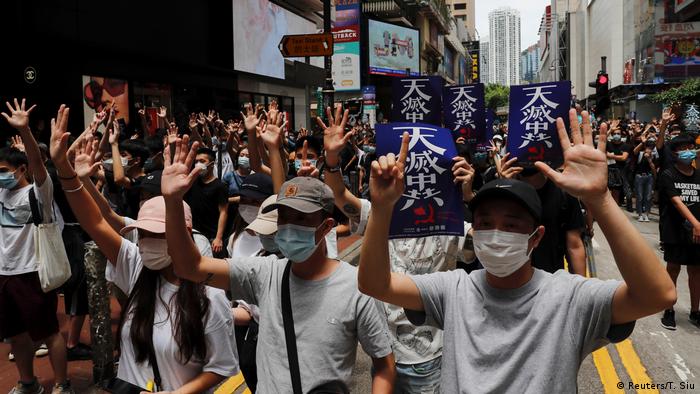 Hong Kong police fired tear gas on Sunday to disperse anti-government protesters as thousands took to the streets to oppose Beijing's proposal to impose new security laws on the city.

Police fired tear gas after they had warned the crowds with loudspeakers that large gatherings were unlawful amid the coronavirus pandemic and that they should disperse.

The unrest comes two days after Beijing unveiled proposals to strengthen "enforcement mechanisms" in the semi-autonomous Chinese territory. Many Hong Kongers view the new proposed national security law as an additional threat to civil liberties and the end of the "one country, two systems" principle.

Tam Tak-chi, an activist from the People Power party was arrested on Sunday, according to the South China Morning Post (SCMP). Tam was taken away by authorities after conducting what he called a "health talk" outside a Sogo department store in Causeway Bay and therefore exempt from coronavirus containment rules. Current virus measures ban gatherings of more than eight people.

Tak-chi said local pro-Beijing figures wanted to make Hong Kong like any other mainland Chinese city. Police reportedly warned him against unauthorized assembly before arresting him.

"Fight for freedom! Stand with Hong Kong!" SCMP quoted him as chanting as he was taken away by police.

After his arrest, more than 100 people gathered outside Sogo, chanting "Hong Kongers, revenge!” and "Hong Kong independence is the only way out!"

Beijing's proposed draft is expected to be passed on May 28. The law could authorize the Standing Committee of the National People's Congress to design a tailor-made national security law and impose it on Hong Kong, bypassing the territory's legislature.

Beijing has decided to introduce the security law via Annex III of Hong Kong's mini-constitution known as the Basic Law, meaning the new law could be enacted without the need for local legislation.

The draft proposal outlined it would "guard against, stop and punish any separatism, subversion of the national regime, terrorist group activities and such behaviors that seriously harm national security".

Mainland agencies would be allowed to operate in Hong Kong, sparking concerns about a crackdown on dissident as well as possible extradition and arbitrary arrests for both Hong Kong citizens and foreigners.

Maria Tam, a Hong Kong law advisor to the Chinese parliament, told French news agency AFP that mainland law enforcement would not interfere in Hong Kong without the "approval" from local authorities.

"I'm not worried about anybody being arrested by a police officer from the mainland and then taken back to China for investigation or punishment," Tam said. "It is not, not, not going to happen."

But protesters are wary. "We won't be as naive as to believe that Beijing will simply sit back and do nothing. Things will only get worse here," Vincent, a 25-year-old protester, told AFP.

Sunday's protests come as the Hong Kong government sought to reassure the public and foreign investors after the proposed laws caused the city's stock market to close down more than 5% on Friday and drew backlash from foreign governments, global rights groups and some business lobbies.

The city's government attempted to introduce a similar law in 2003 but was shelved after the move infuriated citizens. An estimated half a million people took to the streets to oppose the legislation.

Protests have been largely subdued in recent months due to coronavirus restrictions.