Chief Executive Carrie Lam said a controversial security law will not impinge on the city's rights and freedoms. Her comments followed major protests against the draft bill. 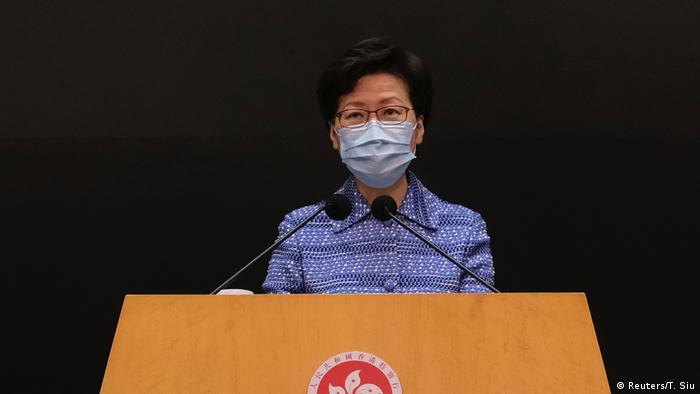 China's plan to impose a new security law on Hong Kong will not diminish the city's rights and freedoms, Hong Kong Chief Executive Carrie Lam said on Tuesday, as she tried to reassure international investors worried by the proposal.

Lam urged citizens to wait to see the details of the legislation, and said the law would "only target a handful of lawbreakers." However, she did not provide exact details on how the law would be applied or what actions and opinions would be deemed illegal.

Opponents of the legislation fear the proposal, which could see Chinese intelligence agencies set up official bases in the city, could bring the end to Hong Kong passing its own laws.

The draft law is expected to be approved on Thursday, and could be implemented by the summer.

'No need to worry'

"There is no need for us to worry," Lam told a weekly news conference.

"In the last 23 years, whenever people worried about Hong Kong's freedom of speech and freedom of expression and protest, time and again, Hong Kong has proven that we uphold and preserve those values."

"Hong Kong's freedoms will be preserved and Hong Kong's vibrancy and the core values in terms of the rule of law, the independence of the judiciary, the various rights and freedoms enjoyed by people, will continue to be there," she added.

The law sparks fears that it could allow for a wider crackdown on those voicing dissent against Beijing, as subversion laws are routinely used against critics of mainland China.

When asked by a reporter whether the law could be used to arrest protesters in Hong Kong, Lam waved off the question as "your imagination," adding that protests could continue if conducted in a "legal way."

Hang Seng down after weekend protests

The announcement of the draft law, which will be written by Beijing and bypass Hong Kong's legislature, sparked the biggest drop on the city's stock exchange in five years on Friday, but Lam called the fears over business-related freedoms "totally groundless."

On Monday, Xie Feng, the commissioner of the semi-autonomous city's Ministry of Foreign Affairs, also defended the law, telling investors that "there was absolutely no need to panic."

Meanwhile, the United States, Britain and the European Union expressed concerns over the laws, while the US warned that Hong Kong could lose preferential economic treatment if the law took effect.

Thousands protested on Sunday after the law was announced, while police fired tear gas and water cannons to disperse the crowd, and arrested almost 200 people.

More protests are expected in the city on Wednesday, against both the national security law and a bill that would criminalize insults to China’s national anthem.

While the contentious extradition law was scrapped, demonstrations continued over calls for universal suffrage, amnesty for those arrested, and calls for an inquiry into the police force's handling of the demonstrations.