Pro-independence candidates have won several seats in Hong Kong's local elections after a record poll turnout on Sunday. The win could strain the city's ties with mainland China.

Hong Kong's pro-democracy opposition bloc won 30 seats in the city's 70-seat legislative assembly in Sunday's election, allowing them to maintain the one-third veto-bloc over the council.

According to the Electoral Affairs Commission, around 58 percent of eligible voters cast a ballot, up from 53 percent in 2012.

In a result likely to shake up Hong Kong politics and strain relations with China, a new generation of young pro-independence candidates also won five seats.

Nathan Law (pictured above, center), a 23 year-old student leader behind the "Umbrella protests" of 2014, won a seat in the Legislative Council or LegCo, Hong Kong's lawmaking body.

"I'm quite shocked," Law said, speaking to news agencies. "We inherit some spirit from the movement, and I hope that can continue in the future... We still have to unite in order to have strong power to fight against the Chinese Communist Party," he said.

Law and his Demosisto party want a referendum on independence. The issue has split the pro-democracy camp, with some supporting the idea of independence while others are more wary of the notion.

Several of the loudest pro-independence candidates were banned from participating in the polls. 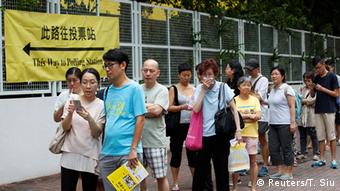 A record 58 percent of voters participated in Sunday's polls

A number of senior democrats faced defeat, indicating that self-determination for Hong Kong and a confrontational stance against China were gaining traction among voters.

"It's a new era," Lee Cheuk-yan, a democratic candidate who lost the polls, said.

"People want change, change meaning they want new faces...but the price is a further fragmentation [of the democracy camp]. Ideologically, they're talking about independence, and they want to assert themselves," he told reporters.

Sunday's polls were the first after "Umbrella" protests shook the city in 2014, criticizing Beijing's increased interference and its stifling of dissent and liberties.

A former British colony, Hong Kong was returned to China in 1997 under a "one country, two systems" deal, which guaranteed separate freedoms and laws for the finance hub.

A number of recent instances of Beijing overtly interfering in the affairs of Hong Kong have led to a backlash among the population.

Observers say that the Hong Kong Legislative Council election will be a lot different this time from the previous one held in 2012. DW spoke to analyst Victoria Hui about what is at stake in the vote for HK and China. (02.09.2016)