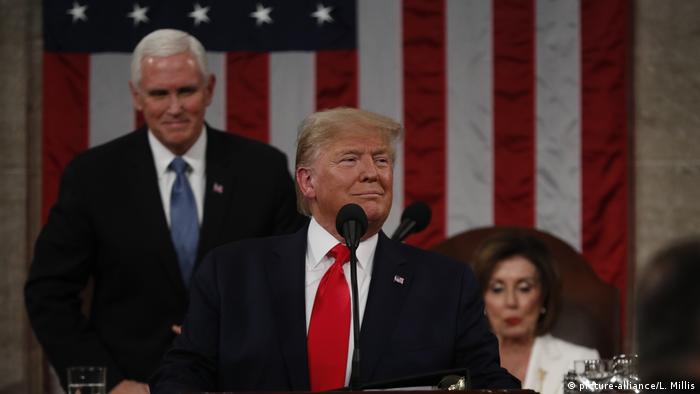 US President Donald Trump delivered his State of the Union speech Tuesday evening, using the annual address to praise his track record over the past three years in the Oval Office.

"Unlike so many who came before me, I keep my promises," Trump said to a warm response from the partisan elements of the house.

He made no mention of the impeachment case during the one hour and 18-minute address, despite intense scrutiny of his actions during the recent proceedings.

The president appeared to refuse to shake hands with top Democrat Nancy Pelosi, the speaker of the House, at the beginning of speech. In turn, Pelosi ripped up a copy of his speech at the end of the address.

Trump praises progress under his leadership

Trump boasted about the strides his administration has made to boost the country's economy and global standing, citing low unemployment figures.

He also extolled the virtues of the trade deal with Mexico and Canada (USMCA), as well as an initial accord with China that sealed a truce to a trade war with the Asian nation.

On the issue of migration, the president touted "an unprecedented effort to secure the southern border of the United States where a long, tall wall is being built."

On foreign policy, he reaffirmed the White House is "working to end America's wars in the Middle East."

The congressmen and women responded to Trump's remarks mostly along partisan lines.

Trump delivered his State of the Union address as nationwide primaries are getting underway ahead of November's presidential election, in which Trump will seek re-election. 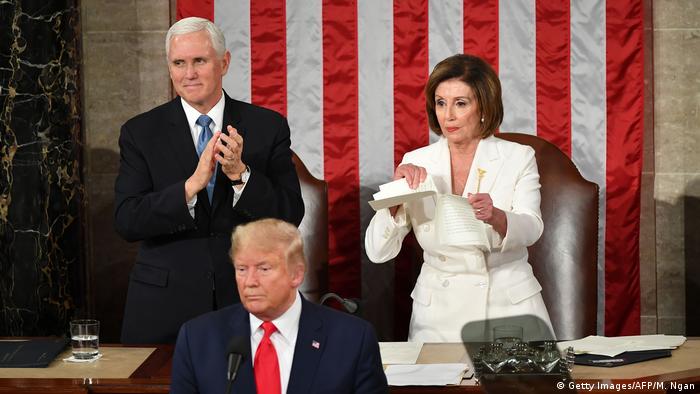 Venezuela's opposition leader Juan Guaido was a guest at Trump's address. The White House has recognized the Venezuelan politician as the South American country's interim president.

Guaido was invited at Trump's behest to demonstrate the US president's backing for his efforts to remove Venezuelan President Nicolas Maduro from power, according to US broadcasters CNN and NBC.

"Maduro is an illegitimate leader" and his "tyranny" in Venezuela will be "smashed and broken," Trump said. He described Guaido as the "legitimate leader of the Venezuelan people," which drew rounds of applause from Republicans and Democrats alike. 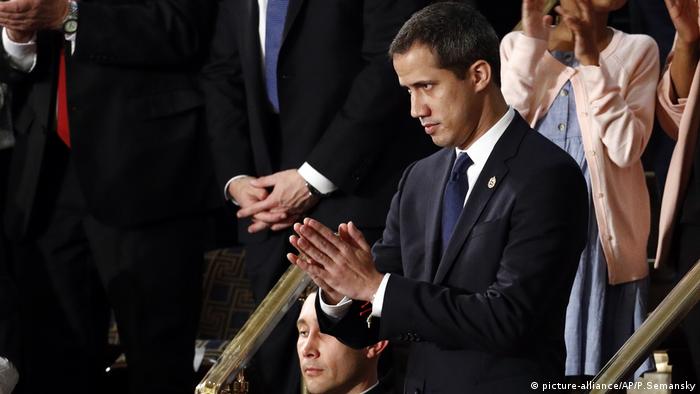 Venezuelan opposition leader Juan Guaido appreciates the support offered to him by his US counterpart, Donald Trump

Though House Speaker Pelosi gave a strong symbolic response to Trump's speech, Michigan Governor Gretchen Whitmer delivered the Democrats' official response to the president's State of the Union address. Whitmer used much of her speech to tout her party's efforts to ease health care costs and to highlight how everyday Americans are struggling to pay their bills.

"It's pretty simple," she said. "Democrats are trying to make your health care better. Republicans in Washington are trying to take it away."

Many Democratic women attending the State of the Union wore white to show support for suffragettes a century after women earned the right to vote.

Some also had green Equal Rights Amendment pins ahead of an expected vote on the issue in the House of Representatives, one of the US chambers of congress. 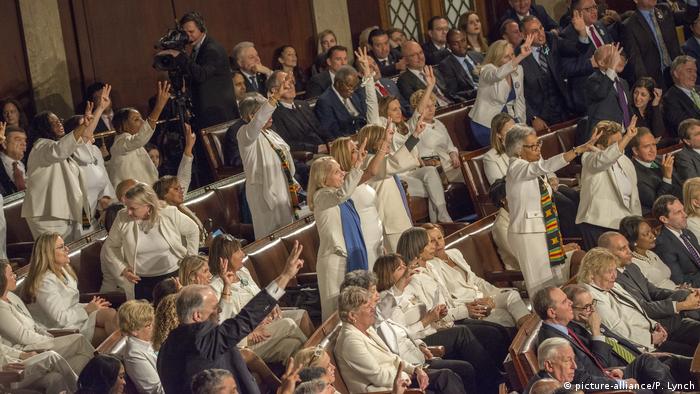 The dispute in the US Senate has initially been limited to the procedural rules of the impeachment process. While the Republicans have not wavered, impeachment proceedings cannot be avoided, argues DW's Carla Bleiker. (22.01.2020)