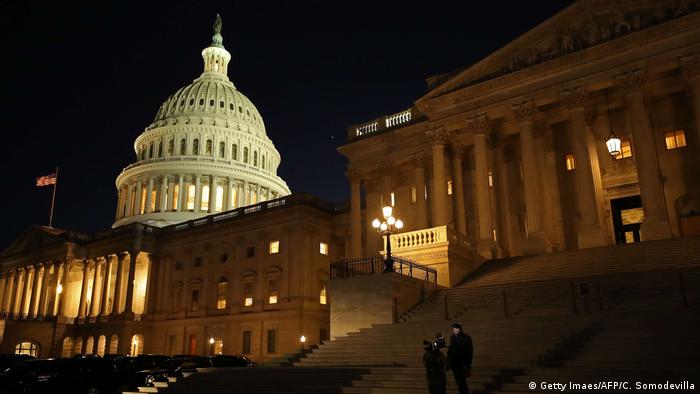 After just a few hours on the first day of President Donald Trump's impeachment proceedings before the Senate, it was clear things were going to drag on until late in the evening. It was not about content but all about the rules of the process, presented by Republican Senate Majority Leader Mitch McConnell.

According to the rules, both sides were to present their views after short opening speeches. First the prosecutors, seven Democratic members of the House of Representatives, followed by Donald Trump's team of defense lawyers. The question of whether witnesses should be heard and whether the Democrats should receive documents from the White House and the State Department was to be voted on after both sides have presented their arguments — that's McConnell's plan.

The Democrats, however, want to speak to witnesses like Trump's former national security advisor, John Bolton, from the very beginning — witnesses who have so far followed White House instructions and refused to testify. They also want to immediately see documents they suspect contain important evidence of Trump's misconduct.

Read more: Impeachment in the US — how does it work?

A trial without evidence?

The president's supporters mock the notion, arguing that the Democrats held long hearings in the House of Representatives, and if they now want to be the first to call witnesses and demand more documents, the argument for Trump's impeachment is probably not watertight. The Democrats counter that a trial without evidence or the hearing of witnesses is not a fair trial, but simply absurd. That's why they're asking for several changes to McConnell's procedural rules.

But their justified arguments fall on deaf ears. As in the hearings in the House that led to Trump's impeachment, the Republicans are toeing the party line. There are 45 Democrats in the Senate, with two independent senators leaning more towards the Democrats, and 53 Republicans. The votes on whether the Senate should request documents from the White House and State Department before the actual proceedings begin had the expected result: 47 for, 53 against, both times. The amendments were rejected.

If not a single Republican dared step out of line on the very first day with its focus on trying to establish a regular trial with witnesses and evidence, then nothing much else can be expected as the process proceeds. Months ago, before the hearings in the House began, experts had predicted that Trump would be acquitted thanks to the Republican majority in the Senate.

Should it come to that — was the Democrats' attempt in vain? Were the impeachment proceedings they brought against Trump a waste of time? Critics who oppose Trump, but also oppose the impeachment process, say the Democrats needn't have bothered. The result, they say, was clear from the outset, and the attacks on Trump only served to win more voters for the President.

In a democracy, the laws are for everyone

But these critics ignore the most important thing. Even if the impeachment proceedings do not have the outcome hoped for by the Democrats, they could not let Trump's misconduct go unpunished. A "who cares, we can't change anything, anyway" attitude signals that a person like Trump, because of his position, can get away with anything and flout whatever law he sees fit. This is unacceptable. In a democracy, everyone, including the people at the top, must abide by the rules.

For three years now, Americans have watched their president make fun of minorities, sow hatred against migrants and alienate allied nations. With his misconduct towards Ukraine he has broken the law with the aim of winning an advantage over his potential political rival, Joe Biden. The Democrats simply could not let that go. For the same reason, they can't fold now, even as they debate the procedure of a trial the outcome of which already seems certain.

It must be clear to Trump and all presidents who come after him: They cannot rule over the United States like an Egyptian pharaoh, who was considered the representative of God on earth. There are laws they must abide by. If they don't, the least they can expect is a trial. Anything else would be a betrayal of democracy.