US Speaker of the House Nancy Pelosi announced that lawmakers will move forward to draft articles of impeachment against President Donald Trump. The president's actions seriously violated the Constitution, she said.

US Speaker of the House Nancy Pelosi announced on Thursday that representatives will move forward to draft articles of impeachment against President Donald Trump, following a hearing.

"Our democracy is what is at stake," Pelosi said. "The president leaves us no choice but to act.

"The president's actions have seriously violated the constitution,'' she added. "He is trying to corrupt, once again, the election for his own benefit. The president has engaged in abuse of power, undermining our national security and jeopardizing the integrity of our elections.''

The statement comes one day after three legal scholars told US lawmakers that they believed that Trump had committed actions that were impeachable offenses under the US Constitution while another argued against impeachment.

Pelosi, the leading Democrat in the House of Representatives, said she had made the decision "sadly, but with confidence and humility with allegiance to our founders and our hearts full of love for America."

Impeachment is the process by which a legislative body officially levels charges against a government official. Democrats are now keen to hold a vote by Christmas. 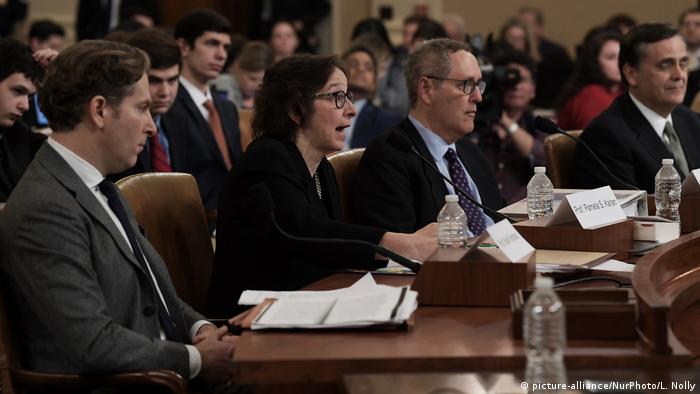 What could Trump be accused of?

The move toward drafting articles of impeachment began after details of a July telephone conversation emerged between Trump and Ukrainian President Volodymyr Zelenskiy. Trump pressed Zelenskiy to launch investigations into US Democrat presidential hopeful Joe Biden and his son. The House Intelligence Committee heard testimony that Trump was delaying the delivery of aid to the country until Zelenskiy announced such an investigation.

Trump is accused of abusing his power by putting personal gain over national security interests. By withholding nearly $400 million (€360 million) in military aid to Ukraine that Congress had approved, Democrats say that he was engaging in bribery.

Republican lawmakers have been derisive of the inquiry, calling it a sham and a Democrat plot to oust Trump. White House Press Secretary Stephanie Grisham tweeted that the "Democrats should be ashamed."

Pelosi's announcement means the House Judiciary Committee has been ordered to draft articles of impeachment. When the committee has finished, the entire House of Representatives, the lower chamber of the US Congress, will debate and vote on whether to bring charges against the president, decided by a simple majority.

If the House approves articles of impeachment, a trial is held by the Senate, the upper chamber. The constitution is open to interpretation about how exactly a trial would be held, but historically presidents have been allowed defense lawyers and to present evidence.

Any conviction of Trump would, therefore, require a significant number of Republican senators to vote in favor of it, which would be historically unprecedented and regarded as extremely unlikely in this case.

The time frame is uncertain, but Democrats are eager to proceed as quickly as possible. Trump tweeted that he welcomes a "fair trial in the Senate."