Opinion: Donald Trump is no accident

The US president is often called a "populist," but Alexander Görlach writes Trump's election was a reaction to the populist who occupied the White House before him. 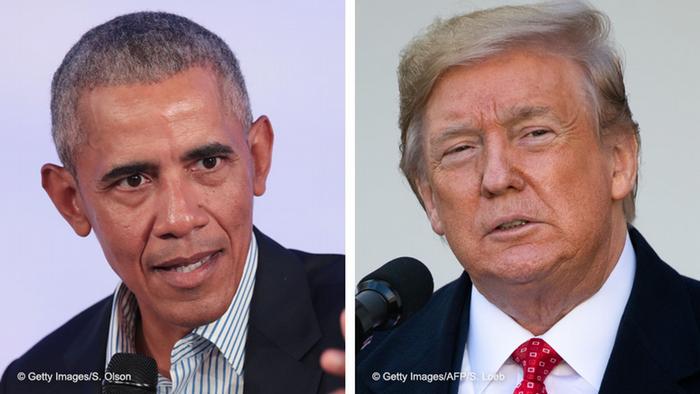 In less than a year's time, elections will be held in the US, and the question is already being discussed of what the country might look like when the populist, Donald Trump, is no longer in power. This is the general problem in the context of populists: They usually don't deliver anything substantial. As a result, once they have vanished into thin air, frustration about the political system and democracy tends to be greater than before.

This news may sound as shocking to many — as it does to the author of these lines — that there are also "good" populists: Those who don't seek to capitalize on marginalization but invoke the spirit of community. What they have in common with the "bad" populists is that they simplify reality to a degree at which no objective policy is possible anymore.

What did Obama actually claim we could accomplish?

"Yes, we can" was a mantra of the 2008 election campaign, the pious and well-intentioned desire to transform America positively after the leaden Bush years. But what exactly was to be accomplished never became clear. The country was supposed to renew itself, but how?

Then came the financial crisis and the opportunity to build something new on the ruins of the Lehman Brothers scandal. But Barack Obama only made use of the toolbox of a learned politician: He saved the banks, but not the hundreds of thousands of homeowners who became homeless. Not a single one of the bankers who caused the chaos ended up in prison for it. The book and the feature film "The Big Short" tells that story in detail.

Many Americans found all this deeply unfair. And if you, like many of them, had to move into a small basement room with your parents-in-law or siblings in order not to end up on the street, then the idea of the nation as a family that ensures fairness seems attractive. This is Donald Trump's message: "America first" means first of all "fairness for us Americans." A cosmopolitan agenda only works when there is fairness in the home arena.

Barack Obama only hammered the final nail in the coffin of a paralyzed policy by remaining stuck in the old political paradigms. The US was once the country with the highest level of mobility. People moved from Alaska to Florida for a new job. That's over today. The 2008 crisis intensified what had been smoldering in the country for some time: rising inequality.

Today, the US is the least mobile country in the free world; the land of opportunity is a distant memory.

It is important for the future of democracy in the US to correctly classify the recent past: Donald Trump is not an operational accident, but rather someone whom his voters consider to be precisely the kind of person who can bring back fairness to the country. For the moment, the figures prove Trump right: Employment is rising, the economy is booming, and in international relations, too, especially with China, his supporters see that he is bringing back fairness.

The cosmopolitan liberals, among them the author of these lines, are going to have to digest it.