The US is wooing Ursula Von der Leyen and her fellow incoming EU leaders before they even take office. Can early intervention with the fresh faces in Brussels smooth out serious trans-Atlantic relationship wrinkles? 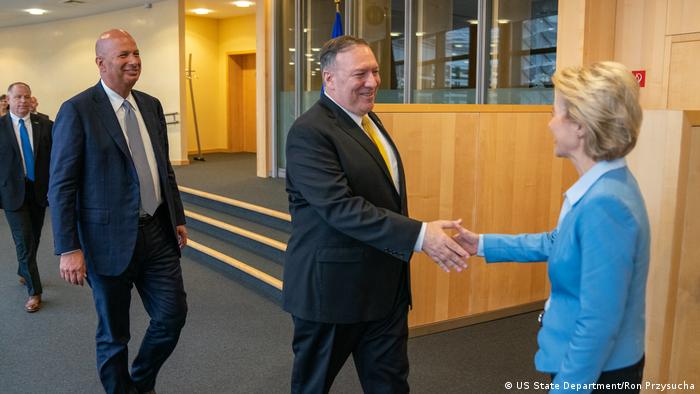 It took just a year for Gordon Sondland's optimism about improving ties between the United States and the European Union to shrivel. The US ambassador to the EU arrived last July believing the Trump administration's blunt approach would be appreciated in Brussels, and cut through some of the difficulties hampering trans-Atlantic ties.

Sondland still believes that could happen, but not with Washington's current interlocutors.

Secretary of State Mike Pompeo just spent two days in the EU capital without so much as a courtesy call to the people who still hold the bloc's highest positions. Sondland explained the US is looking ahead to November 1, when European Commission President-elect Ursula von der Leyen and her administration take office.

Almost as an accompaniment to the meetings, Trump lamented the "geniuses" urging him to work together with the EU against unfair Chinese trade practices. "[R]emember, the EU & all treat us VERY unfairly on Trade also," the president wrote on Twitter. "Will change!"

"Our relationship has reached multiple impasses on multiple fronts with the European Union, on trade and on other matters," Sondland said while giving the only readout from Pompeo's visit, "and resulted in what I would call a lot of uncomfortable, cranky conversations." Controversially, the secretary of state allowed no press to travel with him.

"The idea was to start with a fresh 'turning the page,' 'starting with a new leaf,' whatever euphemism one would like to use," he explained. Sondland expressed great satisfaction with the warmth and content of the meetings, although he said they were not meant to be particularly substantive. "I very much heard [EU] leaders say things that I did not imagine them saying that are very, very closely aligned with our view of the world," he said, without getting into specifics.

Sondland described it as predominantly a change in attitude, saying Von der Leyen, along with other incoming EU leaders, are "less concerned about creating a lot of friction over the tactics and more concerned with working together with the United States to achieve a common outcome," whether on China, Iran or the Middle East. 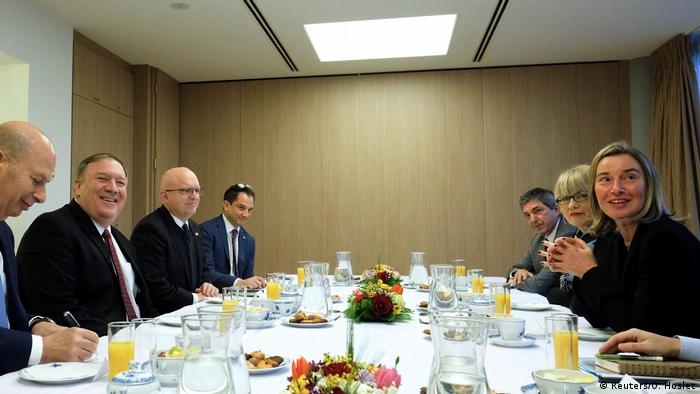 Sondland insisted the US preference for the new officials was meant as no sign of disrespect to the outgoing team. "We've had some great successes together in various areas but we also want the impasses to go away," he explained. "And sometimes the way to make the impasses go away is to change the players on the field."

Even European Commission spokeswoman Mina Andreeva was asked to weigh in on the couth of that calculation, and she sided with Washington. "It's only natural that when leadership changes you will always seek to establish a relationship with the incoming leadership," she said. "I actually view that as a move to maintain support for these very important relations that we have."

'The height of rudeness'

But others clearly see it as not just a snub but a tactical error. "It's the height of rudeness," said Evelyn Farkas, a former deputy assistant secretary of defense under the Obama administration, now with the German Marshall Fund. "It's not clever diplomacy. You need to work with those people and the quickest way to alienate them further is to do what they're doing here."

Farkas believes, however, that on the bitterly disputed Iran issue there may in fact be some improvement once the new EU administration takes over, as Trump wants to score points both with Brussels and American voters fearful of another Middle East conflict. But she says there's "no other way out except for taking [the current nuclear] deal and making it 'better' and putting the Trump name on it."

Farkas hopes the US and EU could compromise with add-ons to the existing agreement, such as extending its time frame, including bans on ballistic missiles and demanding a positive contribution from Tehran on efforts to end the Syrian civil war.

Susi Dennison of the European Council on Foreign Relations (ECFR) believes China is the issue where there may be the most hope for US-EU rapprochement, despite comments like the latest Trump tweet. And according to polling done by her think tank, Dennison even sees some success from US tactics. "The kind of brinkmanship approach that Trump is pursuing in the China relationship is something that Europeans understand more than some of the other" lines that he's taking, she explained.

Dennison, who heads ECFR's "European Power" program, says surveys her think tank has done asking which side Europeans would take in a conflict between the US and China show a preference for neutrality. But beyond that, she says, they show strong support for Washington over Beijing. That's not the case when the question is about a US-Russia conflict, she added.

But Dennison warns the Pompeo approach carries a potential downside that the Von der Leyen administration would be wise to heed. "Building relationships behind closed doors with an administration that is clearly deeply unpopular in Europe does look like a bureaucratic EU that continues on its same course," she said. "It doesn't look very good for this kind of whole image of a changed Europe that's heard the voice of the people."

US Ambassador to the EU Gordon Sondland: 'I love Europe'