From the EU to Trump: Where does Ursula von der Leyen stand? | Europe | News and current affairs from around the continent | DW | 04.07.2019

From the EU to Trump: Where does Ursula von der Leyen stand?

Germany's defense minister has been at Angela Merkel's side since 2005. No stranger to global affairs, she's set to become the next European Commission president. So how does she view Europe's most pressing challenges? 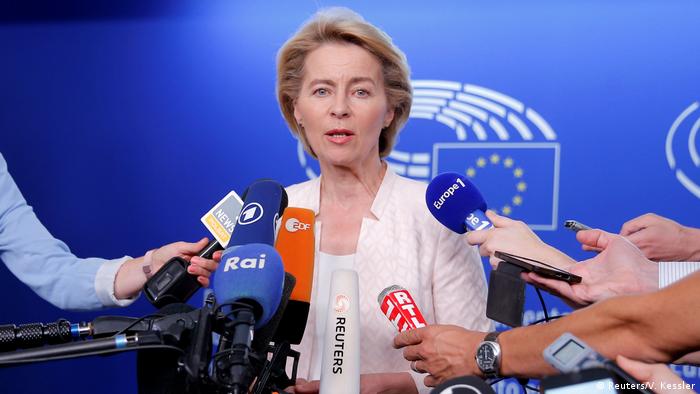 Brexit: Called Brexit a "tragedy," but said decisions must be respected — no second referendum. Believes it will have a negative impact on security policy because the European Union will have less influence overall and only one seat at the UN Security Council. A good "deal" is important, she says, because it is the foundation for future relations, nevertheless, the UK should not get special treatment. Within NATO: "We will continue to work side by side."

China: Says Europe on the whole is paying too little attention to China, although "China is attacking economically." Believes Beijing is putting on a friendly face while it cleverly and purposefully pursues its political aims. Has been critical of China's authoritarian system of government, and the monitoring and control of citizens.

Eastern Europe: Says it is an important region — especially for NATO. Undertook a symbolically important trip to Romania and the Czech Republic in 2015 as defense minister. Criticized Hungary's use of teargas against refugees in 2015, saying it ignores the dignity of human life. Called for young people to support the Polish opposition in 2017. 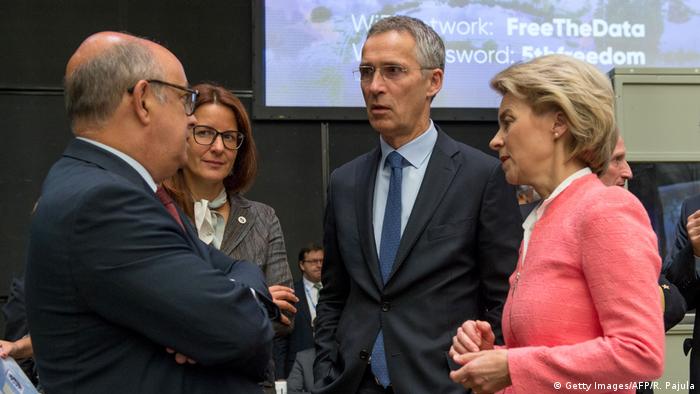 As Germany's defense minister, von der Leyen has been a strong supporter of NATO

EU: Called for a "United States of Europe" in 2011 — at the high point of the eurozone debt crisis. In 2016, she said: "When I think about my children's and grandchildren's Europe, I don't see a loose association controlled by the national interests of a few states." Believes only a strong and unified EU can protect and project its rules and values in a globalized world. She backpedaled somewhat in 2017, however: "People first want to see that Europe can successfully deal with problems on the issues of security, the climate, or common trade policies. Only then will there be trust."

EU army: Supports EU states centralizing their militaries, but believes individual countries should continue to be responsible for their own forces. Has called for an "army of Europeans" rather than an "EU army" — one that should not challenge NATO. Supports closer cooperation on questions of arms, equipment and mission coordination. "Our army of Europeans shows how we can remain trans-Atlantic while becoming more European." Believes cooperation must improve in a post-Brexit world as the UK was always considered an impediment to it.

France: Supported Emmanuel Macron's 2017 candidacy for French president, calling him "an avowed and committed defender of the European ideal who wants to strengthen the European family and lead it into the future." Macron is said to have put her name forth for the job of European Commission president.

Germany: Has earned a reputation as a reformer — especially in her role as family minister from 2005 to 2009, and then defense minister beginning in 2013. That reputation has made her a controversial figure within her own conservative party and among voters.

International cooperation: Under her leadership, Germany's military, the Bundeswehr, launched new international missions and expanded ongoing deployments. Took on new NATO responsibilities and increased cooperation within the new European defense initiative, PESCO. Initiated military support in Mali — with an eye toward stemming the flow of migration to Europe.

Refugee policy: Has yet to say much on one of the most contentious issues within the EU. Mediated naval missions between Greece and Turkey during the refugee crisis. Proposed training Syrian refugees in the Bundeswehr in 2016, saying it would allow them to help rebuild their country later.

United States: Regarding President Donald Trump: "America is more than its president." Said Trump is sowing "uncertainty among partners." Also pushed back against Trump's criticism that Germany spends too little of its gross domestic product on defense. Said budgets are increasing, NATO's 2% of GDP spending promise will be honored, but admitted: "We know Germany has to do more."