German Defense Minister Ursula von der Leyen has described the signing as a "big day for the European defense union." The 'Future Combat Air System' is due to be operational by 2040. 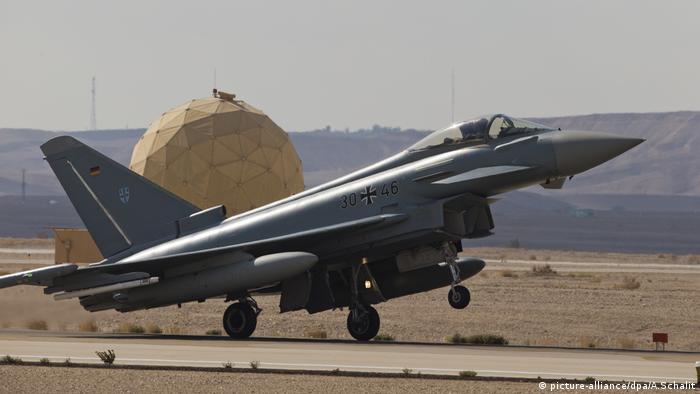 Germany, France and Spain on Monday signed a deal for a next-generation European fighter plane.

The framework was agreed between the defense ministers of each nation with French President Emmanuel Macron in attendance at the Paris Air Show in Le Bourget, just north of the French capital.

The arrangement will include a joint air combat system that could also control drones and satellites.

The Future Combat Air System (FCAS) is expected to be operational in just over 20 years, von der Leyen confirmed: "The system will be ready by 2040, and by then we need to have found a common European solution."

Von der Leyen's French and Spanish counterparts, Florence Parly and Margarita Robles, signed the accord to develop the FCAS with a model of the delta-wing aircraft in the background.

"This project now has a resolutely European dimension: Spain has officially joined the program this morning," Parly said.

As yet, no other European nations have come on board despite murmurings of encouragement from Macron's office.

The French and German governments expect to invest an initial €4 billion ($4.5 billion) in the combat jet by 2025.

Germany's opposition Left party criticised the plans. The deputy leader of the partliamentary party, Sevim Dagdelen, called it a "license to print money" for weapons manufacturers.

The fighter jet may yet include hybrid electric technologies, meaning the craft will be quieter, while also reducing its heat output, ensuring it will be more difficult to detect.

The new plane will replace the present generation of Rafale and Eurofighter jets.

The deal comes at a time of fractious military solidarity between Europe and the US. President Donald Trump rattled German officials last week with the announcement that the US will send upward of 1,000 troops to Poland. Trump said he knew where the forces would come from, namely Germany, causing a mixed reaction in Berlin.

Russia has warned NATO that US President Donald Trump's pledge to send 1,000 US troops to Poland will "destabilize" Europe. NATO forces in member Poland already include a rotating pool of 4,500 US soldiers. (13.06.2019)

The US has warned the European Union that plans to boost defense cooperation within the EU could undo decades of trans-Atlantic cooperation and damage NATO. The EU's foreign policy chief said US concerns were unfounded. (15.05.2019)

Boeing soars past Airbus in Paris