The US has warned the European Union that plans to boost defense cooperation within the EU could undo decades of trans-Atlantic cooperation and damage NATO. The EU's foreign policy chief said US concerns were unfounded. 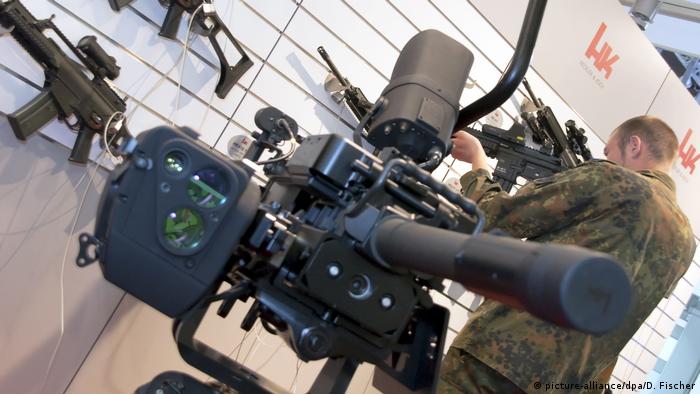 The United States has decried "poison pills" embedded in proposed rules which could shut third country allies such as the United States out of European defense projects.

US Ambassador to the EU Gordon Sondland emphasized the point in a letter and warned of possible US sanctions: "I hope we can avoid contemplating similar courses of action," he said. The EU has been asked to respond to the letter by June 10.

Speaking after EU defense ministers met in Brussels on Tuesday, High Representative of the European Union for Foreign Affairs and Security Policy Federica Mogherini said the US concerns were unfounded.

"The EU is actually at the moment much more open than the US procurement market is for the European Union companies and equipment," Mogherini said in Brussels. "In the EU there is no 'buy European' act and around 81% of international contracts go to the US firms in Europe today."

Self-reliance in the EU

The US concerns are focused on the seven-year, €13-billion ($14.6-billion) European Defense Fund (EDF) approved by the European Parliament in April, and the EU defense pact Permanent Structured Cooperation (PESCO). The plans would see EU states cooperate on projects to develop new military equipment such as fighter planes and drones, and on support systems such as military hospitals and training centers.

German Defense Minister Ursula von der Leyen said Europeans were doing what the Americans had been demanding for many years: building up their defense capabilities. She said it was necessary to trust that NATO would benefit from their collective efforts.

However, the US had written of its suspicions: "The draft EDF regulation and PESCO general conditions represent a dramatic reversal of the last three decades of increased integration of the trans-Atlantic defense sector," US Undersecretary of Defense Ellen Lord and US arms control negotiator Andrea Thompson, wrote in their May 1 letter to Mogherini.

NATO Secretary-General Jens Stoltenberg has publicly backed the pact, as long as it does not lead to duplication.

Mogherini met with EU defense ministers on Tuesday to discuss how to involve non-EU states, including the UK and the US, in the bloc's defense projects.

According to the Stockholm International Peace Research Institute think tank, the US is the world's largest arms exporter with a 36% share, followed by Russia, France and Germany. In terms of imports it sits at 16th on the list, with Germany, the Netherlands and France being the three top sources.

Pelosi: US committed to NATO

Pelosi affirms US commitment to NATO

France and Germany are planning to develop a European fighter jet as part of a project to achieve improved strategic autonomy and end the historic reliance on the US to guarantee regional security.

In 2011, a Franco-British mission in Libya ran out of munitions and equipment and was obliged to turn to the US. The French response has been guided by that experience.